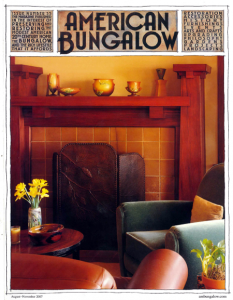 Bungalow Alchemy
by Julie Kolb
An eclectic wand transforms a
1919 Craftsman from modest to magical.

Carthalite — Wichita’s Beautiful Concrete
by Barbara R. Hammond
In its most utilitarian forms, this brand of
cast concrete took shape as columns, lintels
and garden benches. When color was added,
the forms took flight.

Samara: Growing Up and Growing
Old in a Wright Usonian Home
by Terry Tsujioka
Linda Christian Davis spent her childhood
in the house her parents, with only modest
means, commissioned from the legendary
architect. Today her father still invites the
public to visit it daily.

Show Us What You’ve Done
From Getting Acquainted to
Falling in Love
by Rebecca Kuzins
Set designer Karen TenEyck made a career
transition from Broadway to Hollywood.
Then she brought a drab-looking bungalow
in an edgy neighborhood back to life with
her own strong, loving hands. Now the
neighborhood is coming along, too.

Bungalow Renovation
Renovating Your Bungalow Bathroom
by Tim Counts
Whether you need to rectify the sins of
past owners or restore or replace elements
that are breaking down, here are some
vexation-easing tips.

Brand-New Bungalows
Site for All Seasons
by Douglas Mack
On a treasured piece of Minnesota lakefront
property, a family interprets its Craftsman
heritage for the new generation.

A Letter from the Publisher

Open House: Letters to the Editor
Michael Gartner’s portrayal of his father
evokes a reader’s memories of her high-school
English teacher in Des Moines. Another reader
recalls an evening with David Halberstam, and
we are corrected on our own memory of “Little Boxes.”

Antiques
Perspective on Antiques with David Rudd
Our consultant responds to readers’
questions on vintage furnishings.

New & Noteworthy
Pet- (or kid-) sized Mission furniture, a Teco Art
Pottery Collection, contemporary clocks that evoke
the feeling of an earlier era, and a recreation of a
turn-of-the-century rotating bookcase are now available.

LETTER FROM THE MIDWEST
Driving Mr. Gartner
by Michael Gartner
A long life on foot — and in the passenger seat.

American Bungalow News
When Teddy Roosevelt signed the Antiquities Act in 1906,
he hoped to foster respect and stewardship for the
nation’s natural and historic treasures. According
to the National Trust for Historic Preservation,
his vision itself now needs new respect.

From Our Friends
Profits and Loss
by Karen Sullivan
Trees fell and the birds left when a developer transformed
a tiny patch of land into “Plyhenge.” Only the soft glow
from a candlestick remains.

The Bungalow Bookstore
The New Bungalow Kitchen hits the
shelves, along with new books of
bungalow plans and designs. .