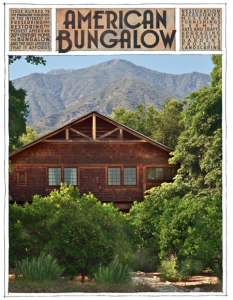 Bungalow Kitchens
Bungalow Kitchens:Changing with the Times 32
By Sandra Vitzthum
In the second installment in our kitchen series, we bring you an
assortment of kitchens from homes featured in articles past, all
showcasing your favorite room in the house.

Rust Belt Revival
Rust Belt Rising: Learning from the Motor City 46
By Douglas J. Forsyth
Home and garden tours, concert series, lively neighborhood
associations—in Detroit? The author explores the surprisingly
successful community efforts of homeowners who came for
the architecture and stayed to save the neighborhoods.

PIONEER PRINTMAKERS
Four Women Visionaries of the American Arts and Crafts Era 60
By Susan Futterman
Well ahead of their contemporaries, these artists from four regions of North America expressed their love of nature through an art form that made art affordable to the masses and that graces the walls of bungalows to this day.

BUNGALOW ARCHITECTS
Living Lightly on the Land: Louis B. Easton’s California Craftsman Showpiece 72
By Robert Winter
A 1907 Craftsman bungalow is saved from demolition—and with it an important part of the legacy of one of Pasadena’s seminal architects.

THE AMERICAN CENTURY
Henry Ford, Environmentalist? 86
By Robert Winter
Henry Ford’s dream of “village industries” and his gift of a Model T
to his friend John Burroughs sprang from an instinct with deep roots in the American imagination.

IN THE BUNGALOW GARDEN
Beyond O Tannenbaum: The Sacred Life of Trees 94
By Kathleen Donohue and John Burke
Making a case for including more evergreens in the Bungalow Garden, the writers explore the spiritual connection between humans and one of the world’s most versatile life forms.

SHOW US WHAT YOU’VE DONE
Meet Me in St. Louis 100
By Mike Knoll
Two Californians return home to St. Louis, Missouri, to rescue the magnificent personal home of one of the city’s most renowned architects.

A Letter from the Publisher 1

Open House: Letters to the Editor 8
A reader shares his handcrafted tribute to photographer Edward S. Curtis, praise for the forgotten Arts and Crafts homes of Toledo, Ohio, and the letter writer who started it all shares how he keeps his Camperdown Elms thriving.

Family Album 14
From coast to coast, readers share their pride in their bungalows.
Perspective on Antiques with David Rudd 20
Miniature salesman samples from Canada, the collectability of Stickley’s Colonial Revival furniture and advice for the care of a Heintz Metalworks lamp.

New & Noteworthy 26
A selection of Arts and Crafts-inspired amenities for today’s bungalow lifestyle.

ARTS AND CRAFTS PROFILE
Beautifully Measured Moments, Present Time Clocks 106
From Pasadena, California, to Acme, Washington, Jim Dailey has made more than 4,000 handcrafted clocks in twenty years, and has heard more jokes about time than he can count.