By Tim Counts
From Issue 79 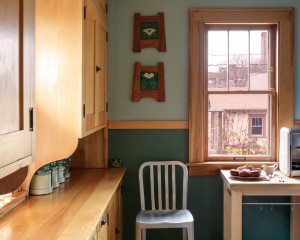 When Web developer Sonja Dahl went shopping for a house in south Minneapolis in 1999, she had difficulty buying one. Not because her finances weren’t in order, but because she kept getting outbid. The first bungalow she bid on received some 20 offers from hopeful buyers. Her second attempt fell short as well.

Those were the crazy years before the housing-market crash, when houses in desirable neighborhoods routinely sparked bidding wars. “Everyone was offering above asking price,” she says.

She and her agent raced to a third house the day it went on the market. Paint on the exterior trim was crumbling and a “Beware of Dog” sign peeked from a grimy porch window. “It looked awful,” she says with a laugh.

The previous owner of the 1925 bungalow had lived there for 65 of its 75 years of existence. Inside, its wallpaper, carpeting and light fixtures reflected multiple decades of fashion. Still, she says, “I immediately saw what it was. I could see that it had all these original features, and that I could do most of what it needed.”

The natural oak woodwork in the living and dining rooms was unpainted and in pristine condition. Sonja walked into the kitchen (through 1980s louvered closet doors) and saw that the original, though scruffy, birch cabinets remained. She looked out the kitchen window to the original cottage-like garage. “That’s when I fell in love,” she says. “Everything was just so cute and bungalow-ish.”

She closed on the house on December 27, 1999, four days before much of the world celebrated the millennium.

Every Surprise a Good Surprise

The bold grain of oak woodwork brings nature’s ornamentation into most Minneapolis bungalows.“I bought this house quickly, without knowing a lot about it,” she says. “Every inch of every wall was papered. Every floor was cloaked in carpet or vinyl. “I had no idea what was underneath.” She and her mother began with the wallpaper, which peeled off with relative ease. But layers of paste underneath required days of effort to dampen and scrape off, filling bucket after bucket with thick, brown goo.

She vividly recalls ringing in the new century. “There was no furniture. I was sitting here at midnight on the floor with my bottle of champagne, stripping wallpaper. Depressing? I was thrilled!”

Still more good news came when the carpeting and vinyl flooring was pulled up. High-quality oak floors ran throughout the main rooms and kitchen; the hallway and bedroom floors were maple. “With this house, every surprise was a good surprise,” she says, beaming.

In the kitchen, white laminate covered the counter and backsplash. “I was afraid the wood underneath was going to be all chopped up and water-stained.” But she peeled it off and found the original wood planks in excellent condition. She stripped and refinished the full wall of cabinets herself, then reinstalled the original drawer pulls and cabinet latches. Fortunately, she found the original kitchen/dining-room door in the basement and reinstalled it.
She considered replacing the wall-hung kitchen sink, but ultimately decided against it, reasoning a new sink and cabinet would be costly and wouldn’t add much benefit. “I saw an old ad from the ’20s that showed a woman sitting on a stool at the sink,” she says, so she bought a stool-height aluminum chair. “I don’t actually sit at the sink, but I wanted to be able to.”

A final pleasant surprise was the discovery of the original dining-room chandelier in the attic. Though a couple of parts were missing, visits to local vintage lighting shops made it whole, allowing it to shine again. Now restored to its rightful place over the dining-room table, it coordinates beautifully with the original matching wall sconces above the living-room fireplace.

Making a House a Home
During the first four years of home ownership, Sonja had a housemate to help with expenses. With both bedrooms occupied, a television sat in the living room, and her computer, occupied the dining room.

“I hated having these beautiful rooms marred by an ugly TV and a computer” she says. So when she was able to afford the mortgage payments herself, her housemate moved out and Sonja moved the electronics to the back bedroom. She set up the main rooms to her liking, outfitting them with carefully chosen furniture, pottery, textiles and artwork.

Though not expensive, each piece she selected has beauty and meaning for her. The doilies in the dining room that bear embroidered olive branches were purchased during a vacation in Greece; a group of handmade art tiles are by a local tilemaker named Pooka Ness, whom she helps with her website. She refinished several pieces of oak furniture herself, and after taking classes at a local business, made matching stained-glass inserts for the windows on either side of the fireplace.

Bungalows Should Have Pianos

Among the bungalows many original details are brass light switches and plates.Sonja, an amateur musician, plays violin in a community orchestra, and in her spare time dabbles on the vintage 1913 Estey upright piano in her living room, which was previously owned by Boston musician Marcia Feldman.
“Bungalows should have pianos,” she insists. Pianos were certainly common in bungalows. Anyone who has visited an antiques shop has seen stacks of sheet music, most of it published during the bungalow’s heyday in the nineteen-teens and -twenties.

She points out that many bungalows in Minneapolis and St. Paul have “piano windows”—a row of three square windows set high on a living-room wall, leaving just enough space beneath for an upright. Though her bungalow was built with a fireplace instead of the signature windows, she made room for her cherished piano on the opposite wall.

The Perfect House
Happy as she is with her house, Sonja admits she was hesitant to have it photographed for publication. “Before I saw the photographs, I thought I’d be embarrassed about my bungalow compared to the others you see in American Bungalow,” she says. “They’re so spectacular.” She breathed a little easier after seeing her home through the camera’s lens.

“These houses are perfect for young people,” she contends. “They’re small, they’re affordable.” She still peruses house listings online and sees an ample number of charming local bungalows, many with original elements still intact. “You can get all these great features, and they’re still under $200,000.”