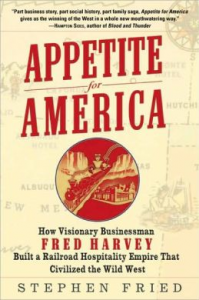 Over the years,” Stephen Fried writes, “Fred Harvey has become something of an obsession, because it seems that the more I learn about him, the more I understand about my homeland, and how it came to be.”

Appetite for America combines a family and corporate history of the Harveys (Fred, his son Ford and Ford’s son Freddy) with a tale of how the synergy between the Harvey Co. and the Santa Fe Railroad enabled the opening of the Southwest to tourism and settlement, introducing Americans to the discovery of their own country as a destination with an allure rivaling, even surpassing,
that of Europe. In sum, a lively chronicle of a significant slice of American life between, as one reviewer put it, “the Little Big Horn and the Manhattan Project.”

That span, of course, also encompassed the Arts and Crafts era and a developing awareness of the nation’s incomparable natural wonders. In one passage, Fried pulls together the strands linking the Arts and Crafts ethos, the architectural and design work the Arts and Crafts–schooled Mary Jane Colter did for the Santa Fe and Harvey companies, and the beginnings of a preservation consciousness under President Theodore Roosevelt.

He tells the story of how Charles Fletcher Lummis, one of the Arts and Crafts movement’s most colorful and committed advocates, helped shape Ford Harvey’s vision of what to do about the Grand Canyon, which he first saw in person from the South Rim one morning in October, 1901, as a member of an entourage led by the Santa Fe’s president, Ed Ripley, that included Lummis as a Southwest guide.

“When Ford looked into the Divine Abyss, he realized that his life was going to change forever…. Gazing into the Grand Canyon, he realized he had found something sacred and mystifying.

“Ford rejoined Ripley, Lummis and the others, and the conversation turned to the hotel the Santa Fe was planning to build on the South Rim—a hotel Ford would be running. But their discussion
soon devolved into a huge fight, with Lummis arguing that the railroad men were plotting to defile the canyon.
“‘You want to put the hotel on the brink?’ he cried incredulously.

“Apparently, Ripley’s architect, Charles Whittlesey—who had never actually been to the canyon—was designing a building with protruding porches and balconies that would jut out over the South Rim. The design would create dazzling views for hotel guests—and destroy the experience of an unimpeded vista for everyone else.

“Lummis shouted at Ripley’s vice president Paul Morton, who favored the site—two friends of Teddy Roosevelt’s now going at it on the canyon’s edge over the future of that edge. Eventually, Morton backed down, and Ripley agreed the hotel would be moved.”

By the time the hotel—having been named El Tovar and placed under Ford Harvey’s supervision—was ready to be built, Roosevelt had proclaimed publicly that the Grand Canyon was “the one great sight that every American should see,” Mary Jane Colter had been assigned to help Whittlesey design it—and it had been moved back from the rim.
“‘Fred Harvey’ was actually the first widely known and respected brand name in America, established years before Coca- Cola.,” Fried writes.