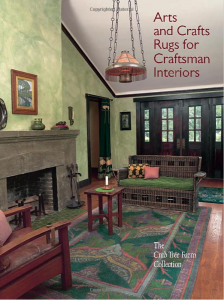 At the beginning of the twentieth century, [Gustav] Stickley was revered not only as an Arts and Crafts furniture maker but also as an advocate for good design and a leading proponent of the American Arts and Crafts Movement,” write David Cathers and Diane Boucher at the opening of this offbeat and generously informative book. They quote a 1904 article in Carpet and Upholstery Trade Review: “ ‘Few men in this country have rendered the service in this direction that Gustave Stickley has. There are few who would deny him the chief place among Americans … in creating a desire among the people … to abandon pretense and ostentation, and to embrace the belief that real elegance is in simplicity.’ ”

Through the pages of his magazine, The Craftsman, Stickley not only disseminated ideas but promoted and marketed furnishings—including rugs and carpeting—that “were at once useful and beautiful, and … added subdued color, rugged texture, and understated pattern to Craftsmen rooms. … Rugs also clarified the spatial definition of the open-plan Craftsman interior. In some Craftsman houses, … the living room, dining room and library constituted a single space with little structural division; large rugs demarcated each functional zone. Most important, rugs created and symbolized coziness, comfort and simplicity. The visually harmonious Craftsman domestic interior could not have been realized without them.”

The book advances the claim that despite their indispensability to Stickley’s aesthetic, “the rugs used in his Craftsman interiors are, arguably, the most under-studied of all the decorative arts of the Arts and Crafts movement.” This claim is somewhat challenged by the book’s bibliography of more than a hundred books, articles, exhibition catalogs and periodicals. But few, if any, of those sources are likely to have embraced both the range of design influences and the depths of technical detail that are on display here, in the book’s descriptions and illustrations of the collection of rugs it documents. That collection—and others drawn upon for the book—includes examples of rugs Stickley offered in his retail showrooms and catalogs, promoted in The Craftsman and chose to display in the landmark Arts and Crafts exhibition he mounted in Syracuse in 1903— rugs whose design influences ranged from William Morris and C.F.A. Voysey in England and Donegal rugs in Ireland to “drugget” rugs imported from northern India and Navajo weavings from the American Southwest.

As elements of the Crab Tree Farm collection, the rugs are combined with American Art and Crafts furnishings in interior settings arranged in accordance with the principles and examples Stickley set forth in The Craftsman. A few of the photographs in the book portray these settings, but only a few. Crab Tree Farm’s interiors, captivating as they are, are not the focus of the book, and these few photographs do not steal thunder from the book’s true subject matter: the rugs themselves, which are portrayed in catalog form, in color on full pages or spreads. The detailed descriptions, most written by either Perry or Cathers, combine technical details of weaving processes with discussion of design elements and influences, as well as production and marketing considerations that often influenced where the rugs were made and how—and to whom—they were sold.

Because Stickley’s influence on the American Arts and Crafts movement is the book’s subtext, it is no surprise to find Cathers writing (in admiration) of Helen R. Albee, whose New Hampshire Abnákee rugs are the last of those featured here: “Her management style and no-nonsense view of Arts and Crafts were very like Stickley’s. Both were at home in the world of commerce; both believed that machines had a legitimate place in craftwork; and both were occasionally criticized for not being ideologically ‘pure.’ ” The movement, after all, was also a business.