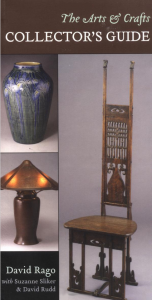 THE AUTHORS OF this handy guide state at least twice that it’s intended for advanced collectors, not beginners. Fortunately, they wait until the end of the second chapter to post the first of these warnings. By that point, any beginner who’s really interested is likely to be hooked.

Despite its nearly 300-page length (the pages are handbook-sized), the book is a brisk read, filled with bits of history, assessment and advice for collectors of American Arts and Crafts pottery, furniture, lighting and metalwork. Pottery gets most of the attention (more than half the book), largely because there were so many potteries — more than 200 — producing American art pottery during the Arts and Crafts period. Not all of them were producing ware in styles that are now considered to be part of the Arts and Crafts oeuvre, however; the guide covers 19 of those that were, including Arequipa, Fulper, Grueby, Ohr, Rookwood and Walley. The coverage of each pottery addresses early and later periods, forms, decorative styles and elements, glazes, manipulation and other characteristics as appropriate.

An early chapter on the history ..of the Arts and Crafts collectibles market points to a fundamental shift in pottery styles that reflected the transition from the Victorian period to the Arts and Crafts period, not just in pottery but in all of the associated domestic arts and crafts. Two examples are used to illustrate the nature of the shift: a 1900 Rookwood vase bearing the portrait of an American Indian chief and a large flaring vase made by George Ohr that same year. The description of the Rookwood vase (and other examples of the Victorian-inspired Ohio Valley School) is adapted from Rosalie Berberian, former owner of ARK Antiques in New Haven: “The clay vessel served as the canvas, and the quality of each example depended on how well the flower, or landscape, or native brave was painted, and how perfectly the heat of the kiln finished the job.”

Essentially, Berberian was describing “the separation of design and medium, one of the tacit definitions of Victorian-inspired ware.”

The description of the Ohr vase portrays a strikingly different aesthetic: “Large flaring Ohr vase with ruffled stovepipe base and dimpled top with torn, floriform rim covered in mottled indigo glaze.” The Ohr piece, and organic works from the Grueby pottery that look “more harvested than potted,” clearly represent something near the opposite end of the aesthetic spectrum: design and medium—art and craft, as it were— united. “Just as Gustav Stickley chose the intense grain of quartersawn American oak as decoration, Ohr often mixed clays to form a swirling `scroddled’ effect. What need was there for decoration when the materials themselves provided
color and pattern?”

After rising from practically zero during the 1970s, interest in all Arts and Crafts–period objects surged in the 1980s, when “some of the best collections currently in existence were either built or filled out . . . and high prices of the favored brands encouraged a greater understanding of lesser but still quality period goods.”

The increased availability of information and an understanding of great Arts and Crafts material on the part of collectors, both individually and as a group, revived the Arts and Crafts movement as worthy of serious investment.

Today the stakes can be very high, with prices averaging in the tens of thousands of dollars per piece. Knowing how an individual pottery’s, furniture-maker’s or lamp-maker’s style changed over time is crucial, as is knowing how to evaluate a piece’s authenticity and condition. The authors devote considerable attention to these issues, pointing out the inevitable vulnerability of vases to chipping and cracking, for example, and of the legs of wooden tables and chairs to moisture damage from standing for years in damp basements. All of this is helpful, but it would be wise to do as these authors have done: get out there and look at and feel as much stuff as you can. And, of course, take this useful book along for reference.