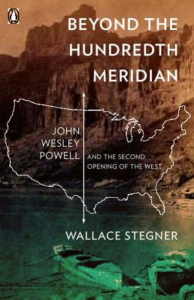 Wallace Stegner
Beyond the Hundredth Meridian: John Wesley Powell and the Second Opening of the West
Penguin, 1992
464 pages, ill., paperback

THE GRAND CANYON THAT WE KNOW today bears the official name of Grand Canyon National Park, a distinction bestowed upon it in 1919 in a last-ditch effort, largely successful, to end three decades of chaotic and ultimately fruitless efforts by pioneering settlers, prospectors, cattlemen, railroads, and other commercial interests to inhabit or otherwise exploit the harsh, arid Southwest’s most dramatic and in some ways most forbidding piece of territory.

Chapter 1 of the National Park Service’s Administrative History of Grand Canyon National Park sets the scene: “In the decades after the Mexican-American War, federal explorers and military in the Southwest located transportation routes, identified natural resources, and brushed aside resistant Indian peoples. “It was during this time that European Americans , following new east-west wagon roads, approached the rim of the Grand Canyon. The Atlantic & Pacific Railroad’s arrival in the Southwest accelerated this settlement, opening the region to entrepreneurs who initially invested in traditional economic ventures. Capitalists would have a difficult time figuring out how to profitably exploit the canyon, however, biding their time until pioneers had pointed the way to a promising export economy: tourism.

“Beginning in the late 1890s, conflicts erupted between individualists who had launched this nascent industry and corporations who glimpsed its potential. During 1901–1919 quarrels escalated to include pioneers, allied with county and territorial governments and the media, pitted against corporations teamed with 112 progressive federal agencies. The ultimate ascendance of the latter coalition resulted in the creation of Grand Canyon National Park. Understanding this struggle helps clarify uneasy partnerships among governments, businessmen, and residents that continue to this day.” One of the first “federal explorers” to make a systematic— even, for its day, scientific—effort to chart Grand Canyon was John Wesley Powell, a mostly self-taught geologist and naturalist who, early in his life, displayed what Wallace Stegner, his biographer—and, with reservations, his champion—called “a kind of ferocity and a restless, driving will to completeness and perfection that distinguished him among Illinois naturalists while he was still a very young man.”

Powell was a Union Army volunteer who ended his Civil War service in 1865 with the rank of Major and a stub of a right arm that had been blown apart by a Minie ball during the battle of Shiloh three years earlier. By 1866 he had been made a professor of geology at Illinois State Normal University. Over the next year he organized and managed to get both state and Federal sponsorship—and, crucially, funding—for a Rocky Mountain Scientific Exploring Expedition that would send a group of men (and, for part of the journey, women) down the Green and Colorado Rivers and through the Grand Canyon. This first expedition made Powell and his party national heroes, and Powell found himself confronting a welcoming and supportive congress when he appeared before it to request funds for a second expedition, which took place in 1871 and 1872.

But “before he ever started down it the second time,” Stegner writes, “the river had lost much of its grip on Powell’s restless imagination. He was already looking beyond it to the unmapped hinterland, the great problems of physical geology, most of all the anthropological exhibits, the tribes both extinct and extant that awaited study. Pulled in a half dozen directions at once, he could not pretend even to himself that he was conducting a field party with a single concentrated purpose. He began delegating responsibility … while he himself shot off on other business.” That other business entailed the exploration and study that led to the publication in 1878 of Report on the Lands of the Arid Region of the United States, a federal document in which Powell systematically dismantled the popular notion that the American West was a fertile garden needing only irrigation and the plow (which would inevitably be followed by rain) to bloom.

In subsequent studies, and in his governmental service during the 1880s in forming and for a time leading the U.S. Geological Survey before resigning under duress in 1894, Powell continued to argue that the arid West was ill suited for agriculture and grazing—even for large-scale human settlement—making himself the adversary of increasingly powerful private interests and their congressional supporters. The fights he started over the protection, exploitation and control of public lands in the West are still being fought today, as is the seemingly endless war over what constitutes the public interest when it comes to the use of natural resources. The library of books that deal with these struggles is still expanding. But for anyone who yearns for a sense both of how the struggles began and what was and still is at stake, these two books are a fine place to start.

Of the Grand Canyon, Powell wrote: “Besides the element of form, there are elements of color, for here the colors of the heavens are rivaled by the colors of the rocks. The rainbow is not more replete with hues. But form and color do not exhaust all the divine qualities of the Grand Canyon. It is the land of music. … With the melody of the great tide rising and falling, swelling and vanishing forever, other melodies are heard in the gorges of the lateral canyons, while the waters plunge in the rapids among the rocks or leap in great cataracts. Thus the Grand Canyon is a land of song.”