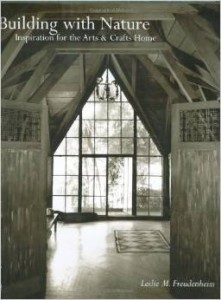 SOME BOOKS ARE REVISED because they provide historic or archival accounts of ongoing processes the evolution of American English, say—and must be reissued periodically to incorporate recent developments. Others are reworked because later research answers important, even fateful questions that were unanswered, or perhaps thought to be unanswerable, when they were first published.

Still others, not surprisingly, are revised when publishers see an opportunity to retrofit an older product for an emerging market. This isn’t typically done with novels, but then novels aren’t Arts and Crafts books.

This new, greatly expanded version of the 1974 Building with Nature poses, and proposes to answer, a question that seems to have gone unasked (perhaps even un-thought of) until now: Is the true source of the American Arts and Crafts movement in architecture to be found in … San Francisco? That is what its subtitle seems to suggest, but not even its author seems quite willing to go all the way with this notion.

“When Gibbs Smith agreed to publish a new edition of our book,” Leslie Freudenheim writes in her new preface, “I decided to continue my research and generate a new book based on, but different from, the original. When I began, I did not suspect California would turn out to be seminal in the development of the Arts & Crafts movement in the United States.”

This suggests that the pioneering role of the book’s subjects, Rev. Joseph Worcester and the circle of Bay Area writers, painters and architects with whom he was associated from roughly the mid-1870s — including architects Daniel Burnham, Bernard Maybeck and A. C. Schweinfurth, artists William Keith and George Inness, and writers Charles Keeler and Jack London —has simply gone unrecognized for the past century, even by Freudenheim and her earlier coauthor, Elizabeth Sacks Sussman, when they researched and wrote the original Building with Nature.

Worcester was born into a New England Swedenborgian church family in 1836. He was groomed to follow in his father’s pastoral footsteps, and he did, but only after spending some time flirting with the idea of becoming an architect. He left Boston for California in 1869 and eventually established a Swedenborgian congregation in San Francisco, for which Schweinfurth designed the 1894 church that Edward R. Bosley has described as “one of the earliest manifestations of the Arts and Crafts movement on the West Coast and, indeed, in the United States.”

Nearly 20 years earlier, in 1876, Worcester had built a one-story, shingle-clad redwood house for himself on a bluff in Piedmont, just northeast of Oakland on the East Bay. Freudenheim has clearly exercised considerable scholarship in attempting to establish that this house was the earliest American embodiment of the “humble cottage” advocated by John Ruskin and William Morris and that it “may turn out to be the original American bungalow.”

Worcester certainly read Ruskin and Morris. So did many other American thinkers, social reformers, writers, designers and architects during the late-19th and early-20th centuries. As Freudenheim writes, though, “It is always a bit risky to announce a ‘first.'”

That is doubly true when the proof, if it exists, seems ever to lie around the next corner and the search ends inconclusively. “California helped lead Americans in the right direction” she writes; “however, exactly how the simple Arts & Crafts home spread across America merits more research.”

The original Building with Nature, subtitled “Roots of the San Francisco Bay Region Tradition,” was well received and is still included in a list of San Francisco Bay Area Architects and Architecture resources maintained by UC Berkeley’s Environmental Design Library. It was a creditable attempt to provide exactly what its subtitle promised: a portrayal of the originators of an architectural tradition that gave the San Francisco Bay Area much of its unique character. The book went out of print years ago, but used copies can still be purchased through Amazon.com, some for under a dollar.