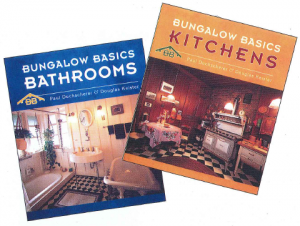 THE FOCUS Is on kitchens and bathrooms in the two most volumes in Paul Duchcherer and Douglas Keister’s Bungalow Basics series. That means the focus is also on the interplay between technology and style, both historically and today, in shaping the functionality and appearance of these most utilitarian of residential spaces. And, intriguingly, it means reminding ourselves that early in the last century bungalows in their heyday—especially in their kitchens and bathrooms — “epitomized modernity and convenience.”

During the latter years of the 19th century and the early decades of the 20th, indoor plumbing and electricity transformed the American home just as the most modern residential style of the time — the bungalow — was also becoming the most popular. Thanks to advances in public water and sewer facilities, Duchscherer writes, bungalow builders were able— and competed hotly—to install bathrooms “that reflected the latest trends and highest standards of efficiency in indoor plumbing.”

Because typical bungalows provided only one bathroom for families of three or four or more, the bathroom was in nearly constant use. Its fixtures and finishes had to hold up well and be easy to maintain and keep clean. The bath rooms of early bungalows tended to be about the same size and use the same light-colored, moisture-resistant finishes that had come into use in late-19th-century homes. Duchscherer writes that this “austere sensibility continued to guide American bathroom design until the 1920s, when more color started to become fashionable. … By the late 1920s (and continuing long after), the advent of colored porcelain fixtures and a widely expanded range of tile colors and specialty trim pieces gave rise to some of the most dramatic bathrooms ever.”

While indoor plumbing made the modem bathroom possible, electrification transformed first the kitchen and then the entire home. American historian David Nye, in his 1990 Electrifying America, wrote that “Although electric lights originally were more prominent in parlors and dining rooms, the transformation of home lighting, design, and furnishing emanated from the kitchen. … The room’s simple forms, light colors, and electrical appliances would slowly pervade the house as a whole.” Duchscherer observes that the demand for reliable electric service, accelerating most rapidly in and around cities, also fostered residential development in another way by linking formerly isolated sections of cities to their downtowns with electric streetcar lines to create “streetcar suburbs,” composed mostly of bungalows.

The rapid expansion of residential electrification began in 1918. By 1924, two million residential electricity customers were being added to the nation’s total each year. In kitchens everywhere, everything but the stove became electrified. “Then as now,” Duchscherer writes, “many people preferred to cook on gas stoves, and they became standard equipment in bungalow kitchens.” Portable appliances — heaters, fans and other countertop gadgets — “reflected the public’s obsession with convenience and modernity.”

As with others in the Bungalow Basics series, Duchscherer’s excellent historical design overviews of the subjects at hand take up the first dozen or so pages of each of these books. Except for the seven-page “Bungalow Background” that concludes each volume, the remainder is devoted to Keister’s full-color photographs of — and Duchscherer’s commentary on — preserved, restored or renovated rooms, with some early illustrations from magazines added for historical reference. The photographs, although restricted in size by the books’ 6″ x 6″ format, are gorgeous. Duchscherer’s commentary reflects both an intimate knowledge of each kitchen and bathroom — often, an intimacy both before and after a renovation or restoration—and an awareness of how a particular room either embodies or embellishes the bungalow norms he discusses in his first chapter.

Indeed, deciding how to read these books can present a challenge, despite their small size. Parenthetical references to the photographs (sometimes as many as six at a time) are sprinkled through out the overview chapter to illustrate each point. In Kitchens, for example, Duchscherer writes, “Most kitchen lighting fixtures were strictly utilitarian, designed to deliver a maximum amount of light with a minimum of fuss (Figures 4, 9, 39, 40, 43, 47).” Keeping one’s eye and mind trained on the main point (maximum light, minimum fuss) can be difficult when photos range from the perfectly preserved kitchen of the Gamble House (Figure 4) to a restored approximation of the original kitchen of the Keyes Bungalow in Altadena, Calif. (Figure 40), to a remodel that has resulted in a new kitchen (Figure 43), each accompanied by 100 to 150 words of commentary that direct attention to other features each room exemplifies, many of which contribute far more to its value as an exemplar.

Readers are urged to persevere, however, even if it means reading some paragraphs more than once, just at it certainly means absorbing the photographs on repeated viewings. Duchscherer and Keister have managed to pack so much documentation into these compact little books that a slight added effort to absorb it all is amply rewarded. Architectural history and design appreciation are not often blended into such enlightening and appealing packages.