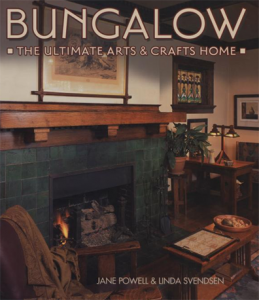 AS SHE CANDIDLY proclaims on her business card, Jane Powell is known for strong opinions, obscure knowledge and bad puns (“joist the facts, ma’am,” “swinging shingles,” “dormer vous,”). Her previous books, including Bungalow Kitchens, Bungalow Bathrooms, Bungalow Details: Exterior and Linoleum, have featured all three, in addition to much practical information on original materials and restoration strategies, along with fine photographs by her photographer partner, Linda Svendsen.

In their new book, Bungalow: The Ultimate Arts & Crafts Home, the puns and practical information have been laid aside—the puns in honor of Powell’s late friend, Jeanette Sherwin, who didn’t like them, and the practical information in favor of “the philosophy, history, and influences that led to the bungalow as we know it in North America.”

The result is a four-pound, 125square-inch, profusely illustrated volume in which the writer-photographer team pretty much throws everything they’ve got at readers, with sufficient control and restraint to make the experience pleasurable and informative without being overwhelming. The book is several things, each sometimes a bit sketchy but, as noted, informative : an illustrated historical and geographic survey of the types, styles and periods of North American bungalow homes (the main text); an anatomy of the exterior and interior features of bungalow architecture (the extensive captions for the photographs); an anthology of quotes from some of the founders and philosophers of the Arts and Crafts movement in Britain; and many strong opinions, which may be found as often in the captions as in the main text.

This, for example, is the caption (on page 136) for a photograph of a bungalow in Memphis, Tenn.:
Probably because of the over-scaled nature of many of their components, bungalows seem remarkably solid and sturdy, and that seemed to somehow go along with the idea that living in these houses would produce levelheaded and reliable citizens. If only that were all it took, we’d be in business. But I don’t discount the influence of the built environment entirely. In the era we are living in now, where most things are flimsy and disposable, how will our children learn to value anything or care for it, whether that be material objects, relationships, or the community at large? At the very least, the massive limestone columns on this Memphis bungalow will not dent when accidentally bumped into, unlike the synthetic stucco over Styrofoam so popular in modern tract houses.

Well.
Powell and Svendsen have ranged widely across the continent, from Memphis in the American South, to Chicago and Milwaukee in the Upper Midwest, west to Denver, on to California (Pasadena and environs and the East Bay, where Powell lives), and up the Pacific coast to Portland, Seattle and British Columbia. Svendsen’s photographs capture the multitude of styles, shapes and colors into which the bungalow archetype was expressed as people moved west with increasing speed and ease between the 1880s and 1930s.

A few of the houses they encountered reappear as Powell moves from one bungalow architectural feature to another—the Lanterman House in La Canada-Flintridge, Calif.; and the Greene brothers’ Duncan-Irwin and Bolton houses in Pasadena, their Pratt House and Henry’s Gould House just north, in Ventura County. Everywhere Powell calls attention to distinguishing details —window muntins, half-timbering, the “banded, or ribbon casement windows” that are characteristic of the Prairie style, “the interplay of siding, shingles, and tapered brick piers” that make up the front porch of a Seattle bungalow.

Indeed, as large and encyclopedic as the book is, embracing bungalows in all their variety across the North American continent (and even reaching back to their British origins in South and Southeast Asia), reading it often seems quite a personal experience, almost as though one were strolling down the street with Powell tugging your sleeve as she points first to this, then to that, explaining, comparing, judging. “Those who know me know that I don’t think much of new bungalows, not while there are old ones to be saved,” she writes, before offering grudging appreciation of a row of newly built houses in Memphis’ Evergreen Historic District that she nevertheless suspects “are all spray-textured drywall” on the inside.

“I do,” she writes, “love them all — tiny, big, zany, architecturally restrained, run-down, restored, designed by architects, built from plan books, ready-cut, brick, wood, stone, stucco—every one of them appeals to me on some level.” You can be sure of that. And although you may not know as you turn the pages exactly where you’ll land next, you do know that you’re on a trip.