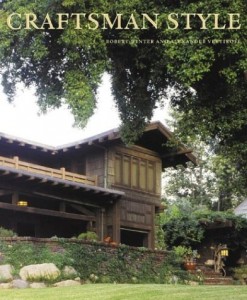 CRAFTSMAN STYLE continues the lushly illustrated series of Arts and Crafts books begun with American Bungalow Style and Bungalow Nation. Sumptuously photographed by Alexander Vertikoff and meticulously written by Robert Winter, architectural history advisor to this magazine, the well-synchronized production team has orchestrated another enticing tribute to exceptional homes. Many homes featured in Craftsman Style were in fact originally photographed for American Bungalow and editorial references are cited as well.

Although reasons for the contemporary appeal of Craftsman styling may be to some extent sentimental or even subliminal, the fundamentals are as fresh today as when the Arts and Crafts movement began when, as Winter writes, “individual liberties were being eroded by mechanization, old values lost in the pursuit of materialism”

Reading this book, it becomes instantly apparent that what sets the Craftsman style apart from other design aesthetics before and after, is that it is so irrevocably tied to the Arts and Crafts philosophy, initiated by British craftsman and thinker William Morris. It is not a style after all, but a way of life.

Gustav Stickley, the William Morris disciple who carried the torch for the American Arts and Crafts movement through his Craftsman journal, facilitated converts to the lifestyle by offering plans for home building for as little as $3. Stickley wrote, “We have from the first planned houses based on the big fundamental principles of honesty, simplicity and usefulness — the kind of houses children will rejoice all their lives to remember as home.” Doesn’t this have a familiar allure today—as families and individuals struggle to maintain their peace of mind and sanctity of homes above and beyond the chaos of everyday life?

Craftsman Style’s broad appeal is that it traces the harmony, detail and warmth of important Craftsman homes of the period (which we can drool over!) while offering interesting anecdotes and insight into the architectural roots of individual designers and their interpretations — and often to their evolution beyond Arts and Crafts.

Many of these architects had unusual beginnings and only came to architecture through many twists of the path. Winter brings their stories to life. For example, Louis B. Easton, who moved to Pasadena, Calif., for health reasons and built his first house after looking at illustrations in a book, soon became sought after as a talented designer and furniture maker. Successful designer William Lightfoot Price built homes for the wealthy but remained interested in theories expounded by Morris and John Ruskin. He put his money where his mouth was, helping create two utopian communities, Rose Valley and Arden, which aimed to attract artisans, artists and musicians dedicated to bridging the gulf between rich and poor.

Charles Lummis walked to California, built his unusual stone house with his own hands, passionately campaigned for civil liberties and education for his beloved American Indians and is the person whom Winter credits with bringing the Arts and Crafts movement to the West Coast.

What a treat to visit these gorgeous homes with such a well-informed guide! We see the merging of Shingle and Craftsman architectural styles, and the reasoning behind the “unusual mix of Japanese and Swiss details” reflected even in simple California bungalows. We gain understanding of design principles such as horizontality, which blends a home into surrounding nature, and insight into the elemental premise of simplicity. Craftsman Style takes us through other variations, too, such as Mission Revival, based on “cultural nostalgia” tying architectural and design elements to sentimental allusions of the past.

I found fascinating that the architects and designers did not design homes with only aesthetic and practical criteria. Their philosophical viewpoint was the essence of their creations. But, interestingly, the homes weren’t simply altars to these ideals, but were cozy and welcoming homes. The lovingly crafted detailing, the homey atmosphere and even the nostalgia factor give all things Craftsman a timeless appeal.

As Winter writes, “The popularity of Craftsman architecture, both old and new, lies in the fact that it looks like home.” And that, combined with the reality that such homes offer emotional refuge from the angst of today’s fast-paced lifestyles, is the basis for their enduring charisma— and the reason Craftsman Style will and should find a welcome place on your bedside table.