By Kathleen Donohue
From Issue 75 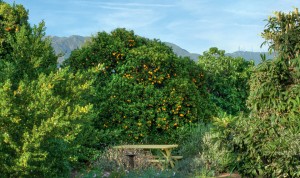 IF THERE IS ONE TRUTH about gardening, it must be this: there is no such thing as a stingy gardener. The practice of digging, planting, tending and nurturing one’s own plot of earth attracts a generous spirit, a caretaker, someone for whom sharing is simply second nature. If you need evidence, just wait until the zucchini or tomatoes are in season. Come August, there isn’t a workplace in America without a cardboard box of surplus homegrown vegetables and a sign proclaiming, “Take some—free to a good home.” Gardeners just can’t help sharing the joy of making things grow. 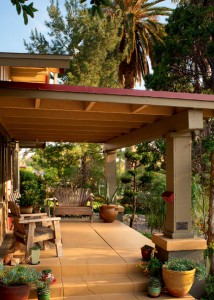 So it is with Pasadena gardeners Martha Clark and Debe (pronounced “Debbie”) Loxton. From the gardens surrounding their 1916 bungalow in Pasadena’s Dundee Heights neighborhood, they welcome countless guests (human and otherwise) at impromptu gatherings. Many an evening is spent out in the greenery, sipping wine around the chiminea with family and friends who rarely leave without a bag of persimmons, loquats or whatever happens to be in season tucked under their arms. Neighbors stop by on their evening walks to admire the progress of the native gardens and share their own experiments with native plantings that Debe and Martha have inspired. In this lush place, the welcome sign is nearly always out. “Our unwritten rule,” says Debe, “is if the back gate’s open, come on in.”

A Garden with a House Attached
What waits behind that gate is a verdant pleasure indeed. The gardens surrounding this modest bungalow, situated on a generous one-third-acre lot, have been thoughtfully arranged in a series of “rooms.” You find yourself drawn from one lovely setting to another on pathways of brick, stone and gravel. You’re struck at once by the openness of the grounds and the inviting intimacy of the smaller enclaves within them.

“I spend a lot of time thinking about spaces,” says Debe, the main architect of the gardens. “About how we want to use a certain area, what its purpose will be. It’s also about making a large space seem smaller and the smaller spaces seem larger.”

Well-tended fruit trees frame the edges of the property, some dating from the 1920s. Many have come as gifts from Martha’s father. Within that framework are the vegetable gardens, raised beds with plenty of native wildflowers close by to encourage pollination. Everywhere you turn are irresistibly cozy spots that invite you to sit, relax and enjoy the view, sharing it more often than not with an astonishing chorus of songbirds. 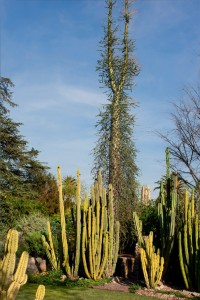 The wonder of this place is so much more than its visual beauty. It’s a feast for the senses. The sounds of the birds, the smell of sage strategically placed to brush you as you walk past, the warmth of the sun on your skin, the tang of a tangerine plucked from a low-hanging branch—you count yourself lucky to spend an afternoon exploring these gardens. But you can’t help imagining … wouldn’t it be wonderful to live here?

Martha, a life coach and adjunct professor at Pasadena’s Pacific Oaks College, has owned the home since 1975. She gives Debe, a school administrator, the lion’s share of credit for revitalizing the gardens and giving them a sense of purpose.

“There was really no focus or direction until Debe moved in in 2005,” she says. “She was the one who started exploring natives plants. Before that it was a hodgepodge.”

“When I looked at the yard, it didn’t make sense to me,” Debe says. “I wanted to create an environment that flowed and was in harmony with the house. This is a California bungalow sitting in the foothills of the San Gabriel Mountains. It made sense to indigenous plants.”

Have Table Saw, Will Travel 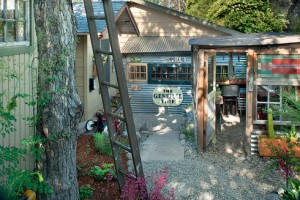 Before the garden project could be properly brought to fruition, the bungalow needed to be restored. Like many older homes, it had suffered a 1970s modernizing remuddle. The original bathroom had been gutted, the classic subway tile and original porcelain fixtures replaced with a fiberglass tub and vinyl flooring. The kitchen didn’t escape either.

Fortunately, though, the great bones of the house still showed. A call went out to troops from Oregon: Debe’s best friend, Sara Berry, whom she calls “Builder Supreme.” They tore out the fiberglass, brought in a clawfoot tub and period-appropriate tile for the bathroom, installed butcher-block countertops in the kitchen and painted the exterior in true bungalow colors. Then they turned to the yard. 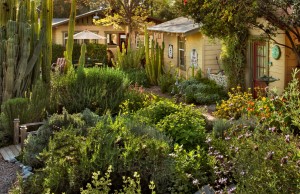 With a third of an acre to work with, Sara had plenty of room to show off her building skills. Using repurposed materials and architectural salvage, much of which she had carted from Oregon, she and Debe built a greenhouse, a tool shed, a storage shed and a wonderfully inviting guest house.

Although the charming group of buildings seems well-planned, Debe says they made it up as they went along.

“The guesthouse kind of morphed—it was supposed to be a tool shed, but somehow, we just kept going. With the greenhouse, we just built the frame and the roof, then made the rest fit. If we were short, we’d add a strip of corrugated aluminum or double-up on a beam or post.”

Debe’s passion for second-hand stores is evident throughout every building and garden plot. Signs, statuary and treasured heirlooms, like a tractor seat from her grandfather’s farm in Alberta, Canada, find homes in just the right spots. “I’ve always been drawn to old things. I ask myself, ‘How can we repurpose this?’ The stuff I find in junk stores adds so much character.”

Going Native
Then it was time to concentrate on the gardens themselves. Though Debe’s main goal was to restore indigenous plants and the wildlife that feeds on them, there is another compelling reason for Californians to go native: the state’s near-constant drought status. 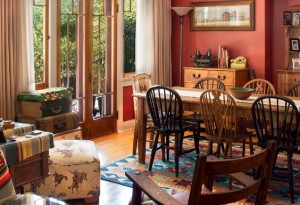 To the rest of the country, Southern Californians may seem a bit spoiled, at least where good weather is concerned. But with the constant warmth comes a major problem—most of the region’s water comes from somewhere else, and those remote sources won’t last forever.

According to the Los Angeles County Waterworks Districts, 70 to 80 percent of residential water is used outdoors for lawns and gardens. In recent years, homeowners have been asked to reduce their usage by 20 percent. Debe and Martha have already reduced theirs by more than half, simply by using native plants. Once they’re established, natives don’t need the constant watering required by lawns, roses and azaleas. They’re programmed for a Mediterranean climate— dry summers, rainy but brief winters. The lush gardens surrounding the bungalow are the direct result of restoring plants that belong there. 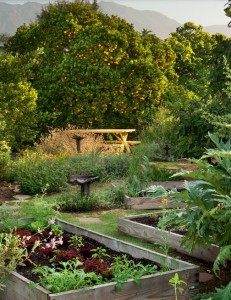 The process of moving to natives was a measured one, though. Rather than ripping out perfectly healthy plants just because they weren’t indigenous, they kept those that didn’t need excessive water. As Martha says, “We have some beautiful plants that have been here for years. They were part of our garden family—we didn’t scorn them just because they were not native.”

But now, when an existing plant dies it is replaced with a native species. This both conserves water and encourages wildlife by providing needed food. Butterflies and their larvae, for example, are notoriously particular about what they eat. Now, the gardens virtually shimmer with butterflies and other beneficial insects—and, of course, the birds that feed on them.

A Garden to Live In

The transition to native plants was made easier with help from the Theodore Payne Foundation, a local organization dedicated to preserving and restoring California’s wildflowers. The foundation offers classes, operates a year-round nursery and conducts gardening programs with local schools. Martha and Debe often turned to the foundation for plants and for inspiration. In 2008, after attending the foundation’s native-plant tour, an annual event showcasing local gardens that contain at least 50 percent native plants, Debe turned to Martha and said, “We could do this.” 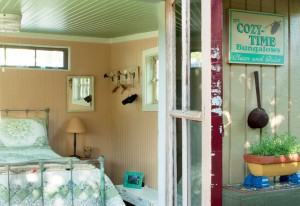 Martha agreed. She invited Lily Singer, the foundation’s director of special events, to come out and inspect the gardens. Debe and Martha were understandably nervous as she moved from one bed to the next. “She didn’t say much,” says Martha, “But as we walked her out to the driveway, she said, “Well, I hope you’re ready for 400 people to walk through your yard.” The gardens were an immediate hit on the tour—so much so that they’ve been invited back ever since. This year was their fourth.

The two get a great deal of pleasure in sharing their gardens this way. “People are so respectful,” Debe says.“They go into the back, and you don’t see them for forty minutes. It’s really fun to have them enjoy the place.” “It’s one of the most popular gardens on the tour,” says Singer. “What they’ve done is brilliant. It’s a garden to live in.”

One of the highlights of the tour is the guest house. Situated at the back of the property, the tiny bedroom with its vintage windows and glasspaneled door is filled with light and color. Twice a year, Sara visits from Portland. She always stays in the guest house she and Debe built. “The smell of the gardens is so therapeutic,” she says. “I love sleeping out here. You’re sleeping in a garden.”

“The only downside,” says Martha, “is that you might have an encounter with a raccoon.” 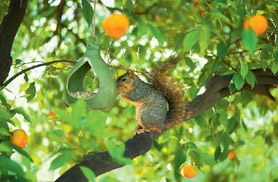 For years, Debe has shared her love of gardening with visitors, but she also takes her plant knowledge on the road. Partnering with the Theodore Payne Foundation, she is bringing native-plant gardening to some of the most underserved students in L.A.—kids she says are “surrounded by pavement.” As Chief Operating Officer of the LA’s BEST (Better Educated Students for Tomorrow) program, Debe teams with Lisa Novick, the foundation’s Director of K–12 Education, to install gardens at schools throughout the district. So far, they’ve installed six gardens, with great success—attendance is up, and the kids are becoming enthusiastic native-plant experts.

Room to Grow
There is another undisputed truth about gardeners—they just can’t leave well enough alone. Even if this garden seems absolutely perfect to any casual observer, you can rest assured that on the next visit there will be something new. And Sara will most certainly be back, hammer in hand, to help construct whatever Martha and Debe dream up. “I’m not sure we’ve even conceptualized what’s next,” says Martha. “But that’s part of the fun.” 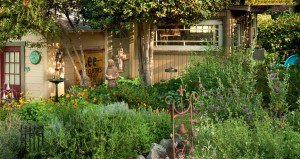