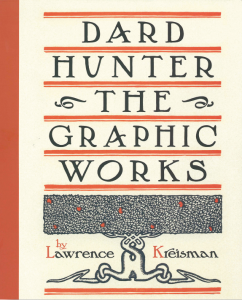 Many people, regardless of their knowledge of design history, can recognize his work and call out a ‘Dard Hunter rose’ wherever it appears,” writes Lawrence Kreisman in the introduction to his new book, Dard Hunter: The Graphic Works. “Dard Hunter, perhaps more than any other American artist of his day, introduced fresh and sophisticated European concepts into the American design vocabulary.” Hunter used a classic version of the rose on the cover shown below.

As Kreisman makes clear, the Dard Hunter (1883–1966) whose work many of us recognize, and whose influence did much to define some of the most iconic elements of American Arts and Crafts design, had what amounted to two careers. What many of us do not know is that the first—during which he produced most of those iconic designs intended for books and other printed materials (brochures, letterheads and promotional pieces), stained-glass windows (some executed, many not) and metal—was relatively brief, lasting just over six years, from July 1904 to November 1910, the year he turned 27. The second—which, in retrospect, overlapped the first—began in earnest in 1911, when he decided to move on from graphic design to immerse himself in the design and production of handmade paper and books. That one lasted the rest of his long life.

The Dard Hunter who produced handmade paper and hand-printed books is revered around the world as a master of the book arts. His 1942 book, Papermaking: The History and Technique of an Ancient Craft, is still considered the authority on the subject. But outside the world of the book arts and dedicated Hunter aficionados, few people know much about that major part of his life.

His design work, on the other hand, mostly executed during his teens and twenties, which he considered a closed chapter of his life by 1911, still visually defines “Arts and Crafts” a century later, whether you know his name or not. That this is so is due in (large) part to his remarkable artistic gifts and his embrace of design elements he adapted from European avant-garde designers, particularly those associated with the Glasgow School and the Vienna Secession Movement. But equally, if not more, important to the visibility of his work during those years was the fact that he was producing much of it for Elbert Hubbard’s Roycroft Press, which distributed it to a growing mass audience of American readers.

“If Dard Hunter had not arrived at Roycroft that summer of 1904,” Kreisman writes, “the Roycroft shops would have most likely continued on a path set initially by Hubbard. Books were designed as the poor man’s William Morris, utilizing borders, initials, and illustration art in the Morris style. And there was nothing remarkably distinctive in the metalwork departments that would speak to modernity. There was no stained glass or jewelry making. “It was Dard’s exploration of European modernism, stylized and conventionalized ornamentation, depiction of nature, and the incorporation of the simple square and spiral geometries in use in Secession design that led to Roycroft manufacturers turning a corner and whetting the public’s appetite. And despite Dard’s departure in 1910 his designs continued to be used into the 1920s, because they were, indeed, some of the signature products of the Roycroft shops.”

As book historian Jean-Francois Vilain wrote in his chapter on “The Roycroft Printing Shop” in Head, Heart and Hand: Elbert Hubbard and the Roycrofters (1994), “Hunter’s masterful sense of book design and his full use, in his title pages, initials, borders, and colophons, of the printers’ skills with multi-color printing, enabled him to create some of the most memorable books of the turn-of-the-century era.” Not just the mass audience of readers but also the vastly smaller and, in their own way, equally influential community of designers in graphics and other media, took note. “Arts and Crafts style” entered the American mainstream.

Beautifully produced by Pomegranate Communications, in Petaluma, Calif., under the auspices of Dard Hunter Studios, the book reproduces a wealth of Hunter’s designs for print and glass, along with a generous sampling of the European work from which he drew inspiration and technique. Kreisman’s narrative brings the young, brash and confident artist to life through his early years, and his critical and historical commentary enriches our appreciation of the vivacious work he produced.