Sarah Susanka and Marc Vassallo
Inside the Not So Big House
The Taunton Press, 2005
217 pages, color photography Hardcover
Purchase Here 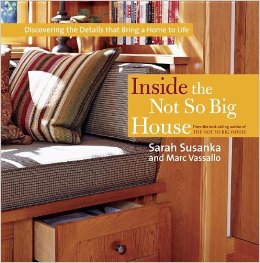 IN THE BOOK THAT inaugurated her campaign as the champion of the “not so big house” in 1998, Sarah Susanka acknowledged her debt to the architect Christopher Alexander, who, with his colleagues at the Center for Environmental Structure at UC Berkeley during the sixties and seventies, developed a “new theory of architecture, building and planning.” Their first and most exhaustive explication of that theory, A Pattern Language, was published in 1977.

“A Pattern Language,” Susanka wrote, “struck me early in my education as the most appropriate way to think about architectural design, buildings, and the people who inhabit them. It is largely as a result of their work, which has provided inspiration for a generation of architects, that I came to write my own book.”

The first 94 of the 253 patterns in A Pattern Language define elements of towns or communities. The next 105 concern the siting of buildings and paths and the external and internal design of buildings, and the final 49 lay out structural details within a building. Although the names of some patterns seem no more than labels (“interchange,” “duct space”), the patterns all embody solutions, and therefore judgments, and many clearly identify desirable features: “sunny counter,” “built-in seats,” “deep reveals.”

Susanka has increasingly adapted the Alexandrian language of patterns into her books, and Inside the Not So Big House, co-authored with architect Marc Vassallo, is, in its much smaller and more relaxed way, a book of integrated patterns meant to help homeowners and architects create living spaces that are “designed well at every scale … so that even if the house were completely emptied of furniture and objects collected over a lifetime, [it] would still feel warm and inviting. It would still have a character all its own.”

This character, she writes, is in the details, whether “a relatively small thing — a doorknob, a newel post, a shelf bracket … [or] larger elements such as window seats and breakfast nooks, hearths and accent walls, built-in cabinets and kitchen islands.”

Throughout the book, these details are identified in language that rings familiar to anyone acquainted with A Pattern Language: “light to walk toward” … “a continuous band of tile” … “big kitchen window” … “entry sequence” … “window like a miniature painting.” In many cases, the detail being examined is illustrated — in a “picture this” sidebar—first by its presence, then by its absence. “[L]ight to walk toward,” for example, shows a pair of views into a dining room through a passageway from a living room. In the first, the dining room table is illuminated by a brightly illuminated pendant light hanging directly above it, and the light and the table are back-grounded by a wall painted an accent color. In the second, using digital imaging, the pendant light has been removed and the accent color has been neutralized, and with their loss have gone a distinctive sense of depth and interest.

In another pair of images, illustrating “kitchen cabinet niche,” a two-tiered bank of countertop cabinet units beside a kitchen sink is shown with and without the lower unit nearest the sink removed and replaced with a vase of flowers. “A display niche has been created by leaving one cabinet unit out” the text reads; “the missing cabinet also allows for more counter space beside the sink.”

Each of more than 20 chapters is devoted to a house built (or, more often, remodeled) to incorporate such details on several scales, from the way trim molding is carved and painted to the placement and structure of stairways and how the size and placement of windows can extend one’s sense of a room’s size to encompass the garden and landscaping outside. Many examples illustrate how the composition of walls and floors can enliven rooms, how bay windows and window seats can add function and interest to rooms even when they reduce the available floor space, and how counters and tables can serve as dividers that both define and unite interior spaces.

As useful as the book is as a guide to configuring interior spaces for comfort, function and beauty, it is also a valuable primer in seeing: in how to look at one’s surroundings both up close and at a distance and to perceive the structural and surface details—the patterns—that lend them character, making them both livable and memorable.