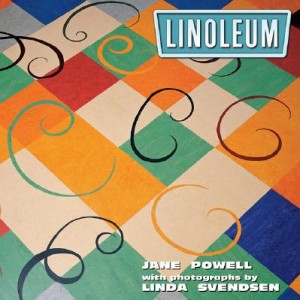 I HAVE BEEN PUZZLED for a long time as to why most people look down on linoleum, aside from it being on the floor,” writes old-house renovator and self-proclaimed “radical preservationist” Jane Powell in Linoleum, her latest collaboration with photographer Linda Svendsen. “Wood, tile, stone, and carpeting are seen as luxurious, while linoleum is viewed as somehow downscale and trashy, worthy only of kitchens or dreary government offices.”

Powell also defends linoleum against the charge that it’s fake. “Linoleum is not alone as a product that is often made to resemble something else,” she writes. “Ceramic tile is made to resemble stone, laminate flooring is made to resemble wood, laminate countertops are made to resemble stone, wood, or even metal.” But even as she and Svendsen document the century-long efforts of manufacturers to make linoleum flooring look like ceramic tiles, marble slabs or oriental carpets, they give us vivid images of the ebullient graphic inventiveness designers—looking for ways to increase sales during the Depression and drawing inspiration from such diverse sources as German Modernism, early Arts and Crafts designers And the drip paintings of Jackson Pollock—were applying to their Products by the 1930s and ’40s.

A mixture of linseed oil, -esins, cork flour and pigments on burlap backing, linoleum was invented and first marketed in England in the 1860s as a more durable and practical alternative to earlier efforts to create long-lasting sanitary resilient flooring using canvas, paint, varnishes and rubber. Large-scale linoleum production spread to Germany in the 1880s, then to New Jersey and Pennsylvania in 1886.

When the Armstrong Cork Company entered the business in 1908, and for nearly a decade thereafter, linoleum was used primarily for commercial installations and residential kitchens and bathrooms, where its sanitary advantages over wood—it is, among other qualities, antibacterial — were highly valued. In 1917, however, Armstrong “took the radical (for its time) step of launching a consumer advertising campaign designed to sell the idea of linoleum for every room, not just the kitchen and the bath. The first ad appeared in the Saturday Evening Post.” A year later, realizing that women were its primary customers, the company established a Bureau of Interior Decoration that “produced booklets and films, put on clinics, and personally answered letters from consumers” on how to use linoleum to create  attractive rooms. Over the next couple of decades, market-share competition among Armstrong,

Congoleum-Nairn and other larger and smaller manufacturers generated intense and innovative advertising and marketing campaigns as America’s midcentury domestic consumer culture took shape, then blossomed after World War II. But the postwar housing boom eventually led to the replacement of linoleum by flashier and cheaper vinyl flooring, and U.S. linoleum production ceased in 1974.

This history is crisply narrated and richly illustrated in the first half of the book. In the second half, the author and photographer turn to the practical matters of caring for and repairing original linoleum, and a survey of patterns used in historical linoleum products.

Fortunately for those who prize linoleum not just for its practical and decorative virtues but for its distinctly environment-friendly qualities (the materials are nontoxic and antistatic and could be safely recycled if there were a demand), linoleum production revived in the U.S. in the late 1970s and early ’80s. The book concludes with a list of suppliers and craftspeople, along with a chief source of vintage linoleum.

As Powell writes in the book’s introduction, “Maybe you wouldn’t want it in your living room, but why not in your kitchen? … Linoleum is too wonderful to dismiss just because it was once considered declasses’