By Mick Woodbury
From Issue 51 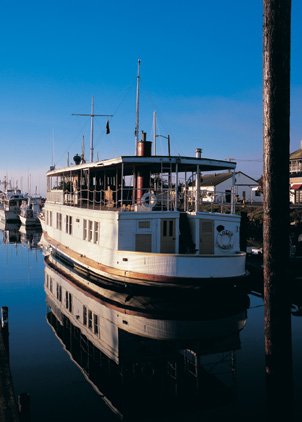 The boat has the grandness of a home, with rich mahogany inlays, Douglas fir floors, and exposed beams in the ceiling. In so many ways, it is like a 2,200 square-foot Craftsman house, except that you can take it for a cruise to Alaska.

Like a Craftsman house with a foundation that seems to have arisen from the earth, the 92-foot Lotus looks so fitting it could have surfaced from the waters of Puget Sound. Surrounded by towering pines, textured hills and a calm blue bay, the wooden yacht – whose unique design was inspired by the double-deck steamships that frequented the sound from the 1850s to the 1930s – is a captivating presence. Inside, its wainscoting, vertical-grain fir and brass lotus-blossom lamps reveal a rich patina that comes only with age and loving care. It seems only natural that this boat, recently featured in the Port Townsend Historic Home Tour, is listed on the National Register of Historic Places.

Outside, the wind is up, the whitecaps are knocking and it’s so quiet, it’s almost like being anchored in the pure, secluded backwaters of coastal Alaska. There’s one restaurant on the waterfront that just serves dinner and is known to be pretty wonderful. A little marina is farther down the bay. The two dozen boats anchored off the port side are bobbing on the chop. Snug in the pilothouse on the second floor of the Lotus, owner Christian Gruye and interior designer Karen Hovde are recalling stories about this remarkable houseboat that has come into Christian’s life for the third time since she was a young girl. 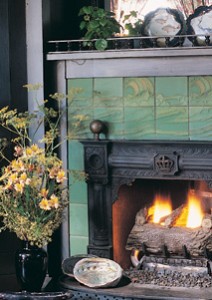 “In 1959, I wasn’t even a teenager yet when my Mom, Kathryn, found a little three-line newspaper ad that led us to a dock where the Gasworks Park is now located,” says Christian, who also runs the Lotus Foundation for the preservation of her seaworthy piece of history. “The Lotus was leaning against the pilings. For my dad, Curtiss, or ‘Papa,’ it was an easy decision that resulted in a quick sale. From then on, my sister, Lezley, and brother, David, and I spent our summers aboard and our days were filled with clamming, fishing and playing on the docks. We even learned to work as maids when we ran her as a “boatel” during the 1962 Seattle World’s Fair. We could sleep 14 people in beds and 4 on beautiful deck seats behind the pilothouse out of the wind.”

“Instead of a family cabin, the Gruyes had a boat on Puget Sound, the most state-of-the art yacht in its day,” says Hovde, Christian’s long-time friend. ” It was built in 1909 for Maurice McMicken, a prominent Seattle attorney, politician and newspaper publisher who wanted to travel the Inland Passage with his family and friends. It is one of a kind, built the best it could be with the finest materials available. The sea-green Grueby relief tiles surrounding the fireplace depict Viking ships. There’s a chandelier in the main saloon, which has built-ins just like a Craftsman home. The heads are as big as any bathroom in a Craftsman home, and there are two claw-foot tubs. You could have a live band and dance floor on the boat deck behind the 18-by-9-foot pilothouse. In fact, they’ve done it! There are even lights and an intercom installed in the days when electricity had yet to reach into many conventional homes.

“This boat has the grandness of a home with rich mahogany inlays, Douglas fir floors, and exposed beams in the ceiling. So many things are very similar to a 2,200 square-foot Craftsman house, except that you can sail it on the open ocean.” 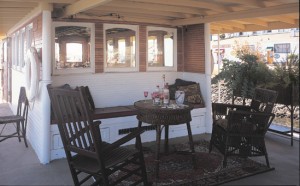 In the 1970s, with their children grown, Curtioss and Kathryn were ready to travel more, and Curtiss sold the Lotus to a Puget Sound historian who, on impulse, bought both the boat and the marina all in one day. “We were all disappointed Papa sold the Lotus, but we knew it was the right thing for him to do,” Christian says. “The very next day, though, he called the buyer and said, ‘I feel awful and I’m having terrible remorse. But all I really want is to have the right of first refusal if you ever decide to be done with her.’ Sure enough, a few years later Papa got the call we had hoped for. He went to the bank that day, withdrew the boat money that he’d never spent, and bought the boat back. We were all so thrilled, and though we were scattered geographically, we all came back right away and started working on her again, even installing a new engine.”

With repairs and a new engine, the Lotus was again seaworthy. It wasn’t long before Curtiss was testing the waters with members of his family, first on outings with his son, then on a “grand adventure” with his two brothers to Alaska’s Glacier Bay. Then he began what would become a long association with wooden-boat and classic-yacht enthusiasts. “Our first wooden boat festival was here in Port Townsend,” Christian says. “From then on, we did every festival in Puget Sound and many in Canada. The Lotus was part of the Washington State Flotilla of Ships to the Vancouver, B.C. Expo in 1986. Mayors even presented her with keys to their cities. The opening-day parades were celebrations we tried never to miss.”

In 1998, after two decades of touring, exploring and tirelessly crewing the yacht with the help of inspired friends, Curtiss sold the Lotus for the second and final time, to a couple who operated it for a short while as a bed-and-breakfast.

They, as well as the father and son they soon sold it to, both discovered how costly it is to maintain an antique 92-foot boat. (Bottom paint alone is at least $100 per gallon.) When the father and son learned the boat’s history with Christian’s family in 2003, they called her and offered it to her as a gift. This time around, the woman who grew up working and playing on the boat she called her second home would have tour guides in her two grown children, Piper and Cody, and the best mooring rigging – not to mention support and encouragement – from her husband, the Master Rigger and author Brion Toss.

“Now, she’s been in our family three times, and each time is with great joy,” Christian says. Also, this time she has Karen Hovde’s Arts and Crafts interior-design expertise. “Every time there was a significant change in Christian’s career path, she would say, ‘Now I can buy the boat back,’” Karen says. “To have the boat gifted back to the family makes it a remarkable story.”

“When she became ours again, we put her in the public domain right away,” Christian says. “We had to haul her out of the water for the insurance survey, but even sitting in the boat yard, she drew attention. People would sheepishly walk up and ask for tours. So we finally made a sign – “Tours Daily” – and opened her up to visitors every day at 5 p.m. when we finished working on her. I’d say that by now, conservatively, a half-million people have walked through this boat. The minute they walk in the door, the first thing that comes out of their mouths is ‘WOW.’ They have no idea they’re going to walk from a common dock to a saloon that just knocks you over, one that’s so beautiful, and so gloriously simple.

“It’s the simplicity of this Craftsman-Edwardian era in the art and décor, when design went from the overdone Victorian, over-ferned sort of setting, to clean lines, strong profiles and beautiful use of materials. In the Northwest in particular, because we’re surrounded by wood, stone and water, it really resonates, and people get swept into it. If they have time, they gravitate to the saloon and there’s always a teapot on for a cup of tea. Or they can sit up on the deck, or in the pilot house. It just makes you want to slow down and step back. I think because wood is a beautiful medium for muting sound, it makes everything mellow. The boat is all wood, so it gives a very solid, quiet feeling the minute you walk inside. And because she’s so big and heavy, she sits solidly in the water. It’s a serene feeling.”

Christian is reminded of the energy and involvement of “our wonderful Friends of Lotus volunteers. Once people take the tour, they want to get involved. Volunteers have made a world of difference. One couple came for a week at a time and lived in their van while they worked on her. We had 1,600 volunteer hours just for the exterior. The Lotus has always been well maintained, so this is not a restoration or a renovation but a continuing preservation. And because people care, pieces of the Lotus’s past are coming back. The fold-up porcelain sinks and deck chairs were returned by previous owners, and because the Lotus crest is on so many items, people will call and say they have a glass or a dish they want to return. It’s been great for Papa, at 86, to come almost every day and know she’s being brought back to her full glory to kick off her second hundred years.” 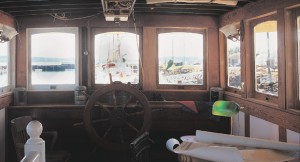 Mick Woodbury is a marketing consultant and lifelong sailor.