by John Luke
From Issue 53 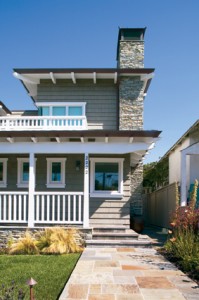 The homes lining Monterey Avenue in Hermosa Beach, Calif., tend to be large — especially those that have been built during the past 15 or 20 years to replace the older stock of beach houses, most of them small to mid-size cottages, that went up on the city’s slopes in the early decades of the 20th century. The value of beachfront property being what it is, construction financing during these years has dictated larger, rather than smaller, homes. Larger doesn’t have to mean unattractive, of course, and the Monterey Avenue streetscape is graced with a number of striking revival and modernist homes that look down the half-mile slope toward the Strand, the Hermosa Beach Pier and out across the Pacific Ocean to Catalina Island some 26 miles offshore, easily visible on a clear day.

Even if all you know about the home architect Michael Lee designed for Steve Plenge and Kathy Briscoe in the 2200 block of Monterey is that it is “Craftsman inspired,” you’ll spot it quickly. Its sea-green shingled exterior, white trim, generous eaves and ocean-facing second-floor decks set it apart, even on a street lined with attention-grabbing houses.

As you approach the house from the street on an autumn afternoon, you walk up a slight rise, then turn left onto a porch that extends halfway across the house behind the shelter of a large meandering melaleuca tree. By the time you reach the heavy, red-stained front door at the far end of the porch you have already left the sights and sounds of the street far behind.

Passing through the door into an entryway from which three floor levels are visible, you are quite simply in another world. On your left is a large sunken living room whose walls are lined with white shelves and niches that are filled with ceramic vases of all sizes, shapes and colors. To your right is a dining room furnished with Stickley and Roycroft antiques, with more shelves housing ceramic vessels and figurines. Straight ahead, an open hallway (really more like a semi-enclosed catwalk) is illuminated by a two-story atrium, where stairways lead to upper and lower floors.

The hallway extends to another open area at the rear of the house. The sunlight that floods into these spaces through the atrium skylight and through large and small windows, is softly diffused by the white woodwork and gleaming hardwood floors. 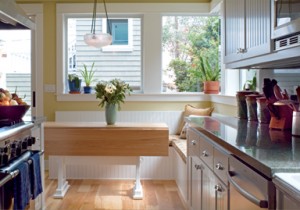 Steve is the son of upstate New York parents. (His father, Edward, collaborated with L. and J. G. Stickley owners Alfred and Aminy Audi in developing the Craftsman Inn, which opened in Fayetteville, N.Y., in 1995.) Kathy was born in Southern California and grew up in Oregon. Both have mothers who are painters and avid lifelong collectors of Arts and Crafts antiques, and both grew up infused with a passion for collecting that they have now shared for years. Their airy, light-washed, multilevel home is, quite literally, the expression of that shared passion: it was designed to make the display of their collection the backdrop for the very active lives they share with their three daughters (the oldest of whom is an art major at New York University) and a large circle of friends and associates.

Arts and Crafts interior designer and author Su Bacon, owner of Historic Lighting in Monrovia, Calif., met the couple in 2002, when they asked her to help them and architect Michael Lee turn the cozy little 1930s beach house they had purchased on one of Hermosa Beach’s eight residential “super lots” into a special kind of living museum — one that emphasized living, and beach living in particular, while embracing the Craftsman aesthetic embodied in their large, eclectic collection of art and artifacts. Kathy recalls that during their first meeting she and Steve were going through several of the Arts and Crafts design books they had acquired, pointing out what they liked best, when they realized that features they especially admired were those Bacon had designed for homes shown in Ros Byam Shaw’s Living with Arts & Crafts. “Every time I pointed to a room or an interior detail, Su said, ‘Well, that’s mine,’” Kathy says. “It was amazing!” 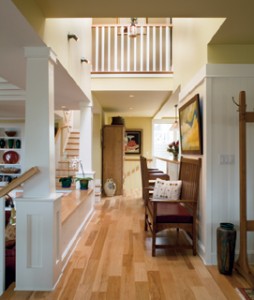 “Steve and Kathy are very much ‘beach people,’” Bacon says. “They both surf, they both view the beach as their natural back yard. And like all beach people, for them the beach means sun. They and their architect, Michael Lee, wanted a house that brings sunlight in from dawn to dusk, and in fact the house is oriented in such a way that the first rays of the morning sun pour into the dining room, where Kathy has her morning coffee, and the last light of the sunset over the Pacific illuminates the living room, with all the art it contains. The atrium, of course, allows sunlight to filter into the center of the house all day long. Everything works to allow plenty of light, but without excessive heating.

“This was in so many ways a very fun experience,” she says. “We were able to experiment, to push it a little, because it’s what we call a ‘paint grade’ rather than a ‘stain grade’ Craftsman. We used white trim and earth tones to keep the interior bright without overwhelming the collection — actually, to give the collection a stage, a dramatic context.” 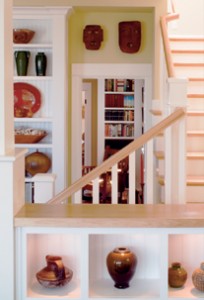 Functionally, the house’s three main levels — two above grade and one below — provide clean, convenient separation of activities. Three of the bedrooms and baths, the decks and the laundry are on the top floor, where the couple’s two younger daughters, Sarah, 8, and Kathryn, 3, share a pair of bedrooms and a bath, the “rainbow rooms,” painted in pastel colors of their choice.

A second master bedroom, on an intermediate level with its own outside entry, is a guest room reserved for Sharsten, their older daughter, when she is home from college. In addition to the dining room and sunken living room, the main floor includes the kitchen, with ample seating for informal dining and socializing, where friends and family congregate at a beautiful wood-topped bar. In the evening, the light from the atrium chandelier spreads a glow throughout the house.

A small library space and powder room connect the living room to a separate family room and guest suite and to a lower level that houses an entertainment center, wine cellar and a separate, small intermediate space devoted to the home’s utilities and storage. The guest suite contains a small kitchen, full bath, second laundry room, large stone fireplace and French doors that open directly onto the courtyard, which has a built-in outdoor fireplace and barbeque area. Across the courtyard, a two-story structure houses a garage, another guest suite above it and a rooftop deck where family and friends routinely gather for a glass of wine at sunset during the long Southern California summer to enjoy views of the Pacific.

Standing on the deck of the master bedroom, overlooking Monterey Avenue as it curves down the hill toward the beach, Steve points out that because of the slope, there is no possibility that the view of the ocean could be obscured by another house. “It’s a perfect location,” he says. “That’s why we picked it.”

Sitting in the living room, while the kids play in the patio with Chester the guinea pig and Rosie, the family’s black Lab, and while Jazz, the 13-year-old, 18-pound Siamese, naps in the sun between them, they reflect on a home well done.

“It took us five years to get to the final plan,” Kathy says. “We spent two years just doing functional ‘story boards,’ and Mike produced five plans before we settled on what we have today. Mike, Su Bacon and our contractor, Frank Abate, were a fantastic team. We couldn’t be happier. The house has worked out beautifully as a gathering place for our extended family and friends.” 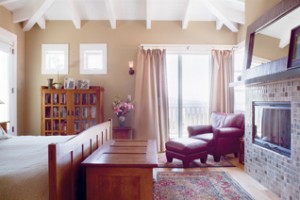