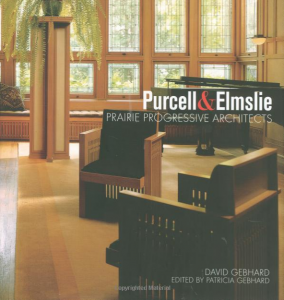 IN THE 1966 EDITION OF his classic American Building: The Historical Forces that Shaped It, James Marston Fitch portrayed the landscape of American architecture during the period from 1900 to 1930 as ”at first glance, … an esthetic wasteland” relieved only by “several minor progressive currents”—primarily the work of Greene & Greene in Southern California and, in Chicago, that of George G. Elmslie and William G. Purcell, both protégés of Louis Sullivan and colleagues of Frank Lloyd Wright. “Their work was considered important enough to merit occupying two entire issues of Western Architect in 1915,” Fitch wrote, before waving it off with the conclusion that “even a cursory examination of this work shows it as derived, in about equal parts, from that of Sullivan and Wright.”

Today, in the longer perspective provided by an additional 40 years, it is possible to read Fitch’s judgment as considerably less dismissive than he seems to have intended. It is no longer a slight to an American architect to suggest that his or her work reflects the influence of Sullivan or Wright. In architecture as in other arts, influence and evolution go hand in hand, and the relationship between older and younger practitioners need not be an anxious one, Harold Bloom’s The Anxiety of Influence notwithstanding.

Now two superb new books bring Purcell and Elmslie to life as essential American architects. The late and noted UC Santa Barbara architectural historian David Gebhard began his project to bring the work of Purcell and Elmslie out from under Wright’s and Sullivan’s shadows with his doctoral dissertation for the University of Minnesota, completed in 1957. He continued to revise the dissertation over the next eight years, producing a manuscript for which he was unable to find a publisher, while authoring a retrospective catalog and two other publications on Purcell and Elmslie before turning to the other projects that would occupy him for the next 30 years. Now Gebhard’s wife, Patricia, has edited his 1965 manuscript for publication by Gibbs Smith, enhanced by photographs from the magnificent Prairie School collection of the Minneapolis
Institute of Arts.

The result is a historically and visually informative guide to the work of these architects, who combined an extraordinary gift for architectural detailing and ornamentation with a masterful command of the Prairie style’s essential characteristics. “In the sense of working out an architectural form that could be shared by a great number of Americans of moderate means,” Gebhard wrote, “the firm of Purcell and Elmslie was far more successful than either Sullivan or Wright. Their small openplanned free-flowing houses suggested a solution that none of their contemporaries could equal.” Here we see why.

“WILLIAM GRAY PURCELL AND George Grant Elmslie were the most productive of all the Prairie School partnerships,” writes Dixie Legler in At Home on the Prairie: The Houses of Purcell and Elmslie. “With Purcell’s business and family connections, personal charm, and analytical approach and Elmslie’s extraordinary artistry and design ability, they eclipsed even Frank Lloyd Wright … as the leaders of the progressive Prairie style between 1910 and 1921.” Legler and photographer Christian Korab have produced a book of lively intelligence, illuminating scholarship and visual elegance. It makes clear how Purcell and Elmslie envisioned their architecture as embracing the populist political and economic movement that arose in the Midwest around 1912.

For them, the Progressive home was “a new house for the modern American family … The firm’s houses are most noted for their sumptuous integrated ornament, but the architects were innovative in other ways: their fidelity to open plans, their use of rich color, their ideas for furniture design and kitchen efficiency, and their overall approach to human comfort.” Legler and Korab explore 24 of the more than 60 homes the firm built during the 12 years it flourished before the Prairie style and much of the Progressive agenda was eclipsed by World War I and its aftermath. Blending correspondence and conversations between original owners and the architects with interviews of current residents, the text establishes what the eye perceives on page after page: a persuasive continuity between past and present in nearly century-old designs that echo in the work of American architects to this day. Through these two books, the anxiety of influence is displaced by what can only be called its triumph.