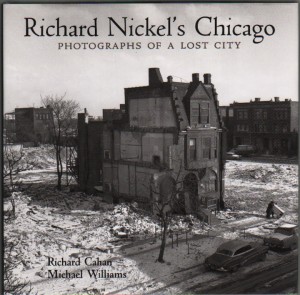 RICHARD NICKEL photographed ghosts,” wrote Chicago architectural observer Lynn Becker in his review of Richard Nickel’s Chicago in the Chicago Reader in 2006. “His subjects were the remains of the ‘City of the Century,’ whose wild growth—from 30,000 people to over a million and a half in less than 50 years—fueled the building boom that created Chicago’s early skyscrapers, its great houses, and the fantasy world of the 1893 World’s Columbian Exposition. But by the time Nickel began taking pictures of Chicago in the 1950s, … a rich architectural heritage that was admired around the world was decimated and discarded as if it were yesterday’s garbage.”

“Richard Nickel is an urban legend of sorts,” Richard Cahan and Michael Williams write in their introductory chapter. Born in Chicago in 1928, he grew up in Polish neighborhoods on the city’s North and West sides, served in the Army in the years right after World War II, returned to the city in 1948 and enrolled at the Institute of Design to study commercial photography, unaware, at first, that the institute had originated in 1937 as the New Bauhaus in Chicago under the direction of Laszlo Moholy-Nagy and Walter Gropius. There his talent as a photographer was recognized and shaped by “two masters of photography—Harry Callahan and Aaron Siskind—who would change his life forever.”

“Most every day,” the authors write, “Callahan would go out and photograph Chicago—often with his wife, Eleanor, and young daughter, Barbara—in search of the perfect negative. He pushed the shy Nickel out into the city, and urged him to zero in on serious subjects. Callahan showed Nickel that a photographer’s life was built around a lifetime of work rather than a single photograph.” Siskind, who “showed Nickel how the world becomes an abstract flat plane in the camera lens,” eventually put Nickel in charge of a team of students assigned to photograph all of the hundred or so buildings known to have been designed by Louis Sullivan. Nickel coordinated the institute’s 1954 exhibition on Sullivan and helped create a book, The Complete Architecture of Adler and Sullivan. Nickel became “transfixed” by Sullivan’s work. Documenting it and fighting, largely in vain, to preserve it—and the work of Sullivan’s contemporaries Burnham and Root and other architects who had made Chicago’s architecture legendary, even as much of it was beginning to be torn down—became his life’s work. Alas, as Cahan recounted in his 1994 biography of Nickel, They All Fall Down, that life was cut short in 1972, when Adler and Sullivan’s 1893 Stock Exchange building, in the process of being dismantled, partially collapsed as Nickel was inside scavenging a cast-off piece of Sullivan’s ironwork.

What he left was an archive of contact sheets of photographs, most of which were never printed, even by Nickel. The Richard Nickel Committee, headed by Nickel’s colleague John Vinci, has preserved and maintained the archive, and Cahan and Williams have been working with it for more than two decades. The present book is the first comprehensive publication of Nickel’s work. And what work it is. Printed as duotones, the photographs are palpable (from the Latin palpare, to caress). Most of the exteriors are muted, shot when the sky was hazy or overcast, but even those that are sunlit have the remote stillness of loss, or of great dignity. Derelict masterpieces loom in the distance over junked cars or stand bereft and shuttered along empty streets. Except for a few sequences—children playing in the streets around Adler and Sullivan’s 1884 Rothschild Houses, passengers in Union Station in 1957, the poet Carl Sandburg on a tour, lone young men and women waiting near Riverside Park’s Tunnel of Love—the city seems abandoned.

There is one brilliant exception: On a cold, clear winter day, from a camera sitting at ground level, scores of overcoated, behatted pedestrians are captured bathed in sharp sunlight as they walk or stand in groups in front of one of the greatest of Sullivan’s masterworks, the Carson Pirie Scott store on State Street, still standing but now closed.