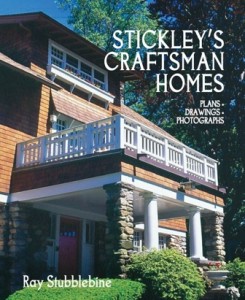 Gustav Stickley’s name has long been firmly attached to his furniture. In recent years, however, interest in the houses that were described and illustrated in The Craftsman and that were built from plans obtained as premiums by the magazine’s subscribers and sold to others has grown as more of them have been discovered, documented and restored. (See, for example, “A Stickley ‘True Craftsman’ Comes Back to Life,” AB No. 50, Summer 2006, page 76.) Although Stickley employed a cadre of gifted designers for both his furniture and the houses that were created under his auspices, Stubblebine writes that “these designers worked for Gustav Stickley, and it is safe to say that as his furniture is Stickley furniture, his houses are Stickley homes.”

Stickley began his career in the furniture business in the late 1880s and began his first “experiments” in Arts and Crafts furniture in 1898. He began publishing The Craftsman as an adjunct to the business in 1901. The idea of integrating architecture into the business and publishing his own home designs appears to have emerged and crystallized around 1903, after Stickley had published several articles on residential architecture by noted architects.

The idea of offering plans through a magazine “was not new,” Stubblebine writes. “Several national magazines (The House Beautiful and Ladies Home Journal, among many) offered architect-designed house plans to readers on a regular basis, and a number of home product suppliers offered brochures featuring house plans. But behind his house plans was a consistent philosophy and a goal. Unlike the great Arts and Crafts architects of the day, who primarily made their services available to the wealthy, Stickley aimed for all those who dreamed of building their own special home; his idea was to empower the common man with the material and guidance needed to build that personal `Shangri-La.'”

In a short section concluding a chapter on the evolution of Stickley’s homes, Stubblebine notes, “It is important to understand that the Craftsman Home has roots in all of America. … Ideas from every part of the still-young nation were brought to bear by using buildings already in existence in the American vernacular landscape and by re-creating them through the ideas and ideals of the Arts and Crafts movement. They were not only buildings, but they were, by their design, going to improve the way people lived.”

In the first 100-odd pages of the book, Stubblebine traces the origins and evolution of the Craftsman Home idea and the design and building of Stickley’s own family homes. Over the next 400 pages, he covers each of the Craftsman Home designs, beginning with “No. 1 (Series of 1904, No. 1) January 1904” and ending with “a very simple bungalow cottage,” published in December 1916, shortly before Stickley’s business collapsed into bankruptcy.

“A goal of this book,” he writes, “is to make all of Stickley’s known designs available in one place for the first time.” Although two books of Sticldey’s house plans have been made widely available, they contain fewer than half of the homes that were published. Moreover, Stubblebine’s research suggests that Stickley’s shop may have designed more —perhaps many more — homes that were done as individual client commissions. As his research and that of others continues, the present book marks a milestone in Stickley studies that is likely to be an essential guide.

“Only now,” he concludes, “is Stickley’s profound effect on modern design being recognized. Now it is time to explore his impact on popularizing residential home styles in the twentieth century—for that may be his greatest legacy.”