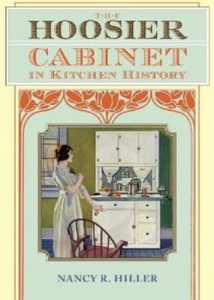 In her study of the origin, ascent, fall and legacy of the Hoosier kitchen cabinet, Bloomington, Ind., cabinetmaker and writer Nancy Hiller has produced a book that is as much a small gem of American social and cultural history as it is the history of a product or (less so) of a company. While not as all-embracing or as exhaustively detailed as some earlier examples of the genre—Harvey Green’s The Uncertainty of Everyday Life, 1915–1945, Roland Marchand’s Advertising the American Dream or Richard S. Tedlow’s New and Improved—her book treats the Hoosier cabinet’s brief existence not just as an episode in the evolution of the American kitchen but as a case study in the early-20th-century development of the consumer society, whose DNA choreographs the elaborate pas de deux between sellers and buyers we know as marketing.

“The Hoosier cabinet as an artifact embodies the social and economic developments that turned us from a nation of producers to consumers,” Hiller writes in her quite substantive introduction. “The cabinet itself, designed and sold to aid women in their kitchen labor, was only able to be produced because of changes in the handling and transportation of raw materials that took place in the late nineteenth century, changes in energy supply that gave rise to the mechanized factory, and changes in transportation that allowed for the shipment of finished products to increasingly far-flung places.

“The cabinet [also] provides a concrete symbol of the nineteenth-century preoccupation with efficiency that swept across the spectrum of American life. During the years of the Hoosier cabinet’s manufacture, production methods themselves became markedly more efficient as a result of time and motion studies. These same studies were employed in the marketing of the cabinets, which were touted as saving thousands of steps in meal preparation. “Coinciding with these developments, selling as a profession in its own right was now regarded as something of a ‘science;’ every aspect of this field was being analyzed and refined, from advertising copy and promotional events to the most effective ways for salesmen in retail stores to stand, move, and smile while demonstrating specific products.”

From Making to Buying
Hiller recounts cabinetmaking’s pre-history in the experience of Indiana’s settlers and its contrast with the trade as it is practiced in our own time. “Cabinetmaking today is a breeze compared to that trade’s realities through most of history,” she writes. “[T]he fact that we can just go out and purchase tools at all … constitutes a huge improvement over the experience of our forebears two hundred years ago, who understood all too well that tools had to be made and who, as often as not, made their own from whatever materials they could find nearby. “Beyond the question of tools, we no longer have to fell our own trees. … Until the middle years of the nineteenth century, all work was effectively done by hand. To build a cabinet or other piece of furniture required a serious investment of physical labor, making cabinets highly valued commodities.”

In the second half of the 19th century, as the industrialization of materials for the home advanced, interest in the role of women as middle-class homemakers was also increasing. The most influential early expression of this interest was the Beecher sisters’ The American Woman’s Home, published in 1869. Arguing that the wife’s role as homemaker was physically arduous and unjustly—and, perhaps most important, unnecessarily—deleterious to her ability to take a fuller and more liberated role in society, the Beechers scrutinized the tasks of homemaking, looking for ways to reduce the amounts of time and work they took. They also identified what they saw as deficiencies in home design—including, of course, the kitchen—setting in motion a search for more functional space and furnishings in residential design that, amplified and refined by Christine Frederick’s 1910 The New Housekeeping: Efficiency Studies in Home Management, intertwined with the Taylorization of the country’s modernizing industries and of society itself.

As far as can be determined from early accounts, The Hoosier Cabinet Company was formed the same year Frederick’s book came out. Relying heavily on the rising influence of advertising and a well organized and meticulously trained sales force, it rode the valorization of systemization and efficiency to market supremacy.

“By 1920 the Hoosier Manufacturing Company alone had sold two million cabinets, which translated to getting its product into one in ten American homes,” Hiller writes. “This figure does not take into account a single one of the competition’s ‘Hoosiers’ that could be found in many thousands of other households. The cabinets’ penetration into the U.S. market represented an unprecedented level of sales and reflects the success of new methods of marketing and distribution. No wonder these companies’ advertisements are increasingly turning up in scholarly works that examine our nation’s transformation from a production-based economy to a culture that has been increasingly identified and defined by consumption.”

But the company’s success at selling its essential ideas—efficiency, simplicity, modernity—mortally crippled the product that embodied them. When the economics and combined efficiencies of manufacturing, transportation, construction standards and easy on-site installation made built-in cabinets, assembled to suit the homeowner’s preferences, overwhelmingly more appealing, no amount of advertising and salesmanship could keep the Hoosier competitive.

Today, the Hoosier cabinet lives on as a collector’s item, a still desirable component of many restored early-20th-century kitchens, and as an acknowledged influence on the design of modern kitchen cabinetry. Hiller herself, the scholar-cabinetmaker, has built a particularly fine example herself. You’ll find a snapshot of it on page 119 of her remarkable book.