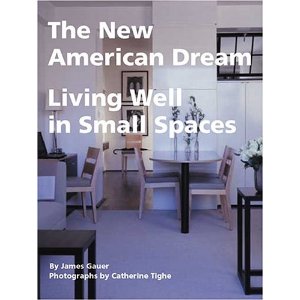 WE LIVE IN AN AGE of astonishing excess,” James Gauer writes, “when having and wanting more is a cultural mandate. We use our brains and energy to work hard, and a big house or apartment is often the visible reward for our efforts. But a smaller house or apartment might be a much better reward, because it takes even more brains and energy — and, for that matter, taste— to live simply and modestly.”

Gustav Stickley didn’t put it quite that way, but one can imagine that the old Craftsman would agree. Indeed, in an early chapter, “Architectural Precedents for Modest Dwellings,” Gauer cites Stickley as a predecessor who “brought a true believer’s zeal to the campaign for small, affordable cottages and bungalows” that were made to seem larger and more commodious by “the careful use of proportion, scale, and line.” Gauer also finds historical precedents for small homes in the work of designers and architects ranging from John Ruskin and Andrew Jackson Downing to Frank Lloyd Wright, Mies van der Rohe and the creators of John Entenza’s Case Study Houses.

“Any of these examples alone, but certainly all of them together, might have established a tradition of dignified small dwellings strong enough to withstand the late-twentieth-century onslaught of McMansions and cheesy ‘luxury’ apartments,” he writes. “We would do well to ask ourselves where they might have led us, had we paid more attention to them.”

Gauer has asked the question, and here he presents some answers, in the form of 15 small homes and apartments designed by architects who “have paid attention to historical precedents.” Style is not the issue here; as he writes, “This book is not intended as a posthumous paean to Mies van der Rohe or to any other architect or architectural style.” The issue is how to manipulate space to translate an understanding of basic human needs into “places of great beauty, utility, and comfort.”

This, he asserts, can be done through adherence to ten principles that “apply to dwellings of all sizes, but … especially to small houses and apartments” where their impact can be more intense than with a large space. The ten principles —proportion, modularity, scale, transparency and spatial layering, hierarchy and procession, light, multifunctionalism, simplicity, economy, and modesty provide an organizing structure for the presentation of the dwellings he has selected. All of the dwellings embody all of the principles to some degree, he says, “But each one is an especially adept illustration of one principle in particular.”

Ten brief essays introduce the sections of Chapter Three, “Architectural Principles and Examples,” which makes up just over 200 of the book’s 240 pages. The essays weave occasional allusions to the works of past and contemporary masters with Gauer’s own assertions about the effects on the humans who experience them of the architectural elements enunciated in his ten principles.

Gauer makes the case for his principles in the “examples”— his descriptions and analyses (and Tighe’s photographs) of each dwelling, as well as floor plans, which he argues are “fundamental drawings” that many books on architecture, especially those intended for lay readers, omit.

Each presentation is austere and strictly sequential: text / initial image (usually an exterior, uncaptioned) / floor plan (un-annotated) /remaining images (uncaptioned). This austerity is elegant, but it is demanding: the “lay reader” the book is aimed at must be prepared to work reflectively from description to floor plan to photograph and back again in order to comprehend the dwelling and its embodiment of the principle Gauer has assigned to it. This is not necessarily bad; a good deal of learning may result.

The designer Charles Eames declared, “Eventually, everything connects.” Gauer, deliberately or not, evokes Eames’s classic short film “Powers of 10” in making his most persuasive case for smallness: “We need never pine for large quarters if we remember this: home is not a self-contained world but a toehold in a larger world. We don’t just live in our houses and apartments. We live in houses and apartments on streets in neighborhoods in communities in towns and in cities. The porch, the front stoop, the sidewalk, the street, the square, and the park expand the confines of home beyond the enclosed space of the house or apartment and into the space of the public realm. The private home is just the smallest in a series of concentric units. Seen in this context, how large does it have to be?”