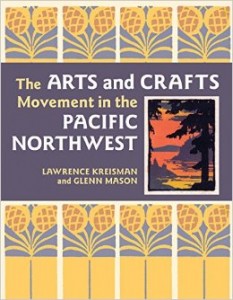 LAWRENCE KREISMAN AND GLENN Mason write in their fine new book The Arts and Crafts Movement in the Pacific Northwest that “From the 1870s on, many communities in the Pacific Northwest mounted yearly agricultural and county fairs in which handicrafts, furniture making, textiles, and even some decorative oil paintings and watercolors were displayed and awards given. This … reflected a growing American middle- class culture heavily oriented toward the domestic and the practical. Domestic arts … were promoted through popular magazines as the women’s rights movement grew and found fertile ground in newly developing cities and towns.…The growing middle class aspired to affordable family housing and was encouraged by the many new options available to them. Art and handicraft displays were included in regional expositions, providing important education to a new crop of potential homebuilders and buyers.” Two pivotal expositions, the Lewis and Clark Centennial Exposition in Portland in 1905 and the Alaska-Yukon-Pacific Exposition in Seattle in 1909, not only showcased (and accelerated) agricultural, technological, industrial and cultural developments in the growing American West but “stimulated regional interest in design, with many examples of persuasive influences, including: Asian architecture and design; Spanish missions that embodied an indigenous architecture Americans might take as their own; and the power, beauty, and utility of local building materials— Douglas fir, clay, and stone—in sophisticated buildings inspired by pioneer traditions.

As a teaching tool, the fairs exposed the public to a broader range of design efforts than most had ever seen, bringing together the wealth of Asia, Europe, Alaska, and America.” Kreisman and Mason devote much of their book to the architects, builders, planners, writers, artists, publishers, educators and enterprising cultural promoters, many of them women, who wove Arts and Crafts ideas and practices— including the idea of the bungalow—into the region’s landscapes, homes and communities. Perhaps the most successful promoter of the bungalow and “bungalow culture” during the peak years of the teens was Jud Yoho, the enterprising Seattle businessman whose “entrepreneurial nature could have competed on an equal level with Elbert Hubbard” and who in 1912 took over publication of the Bungalow Magazine from Henry Wilson, who had been publishing it in Los Angeles since 1908. As the authors describe it, Bungalow Magazine packed between its covers a breadth of information that today requires an entire shelf of publications, from the actual construction of houses to the tiniest details of interior finishes, furniture and accessories. The first half of the book covers the broad developments that helped bring the Arts and Crafts into the Northwest region. The most admirable efforts of historical reclamation, however, are evident in the two sections that make up the second half of the book: “Applied Arts and the Designed Interior” and “Regional Artistic Expressions.”

Here they give us an intimate introduction to the noted but also unknown and little-known artisans, designers, painters and photographers, printers and bookbinders who made things for people to live with. Here, not far from a soft focus photograph of a young woman painting a vase in a china painting class, they write, “for hundreds of individuals in Oregon and Washington in the first quarter of the twentieth century, their personal experience of creating beautiful things by hand became an important part of their lives.” Kreisman and Mason have admirably achieved the goal they set for themselves: “to begin to fill what we perceived was a regional void in the scholarship and literature about the American Arts and Crafts story.” Most notably, they have restored a particular kind of balance to a story that has elsewhere tended to inflate into a grand narrative of “ultimate bungalows” and the celebration of $25,000 vases, leaving behind a more modest but vastly more influential tale of changes in the way people lived as an American middle-class culture began to form. They have framed this tale as a regional one, but it can also be read as simply an American one, with more rain and taller trees.