By Roger Rittner
From Issue 64 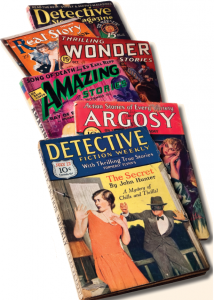 The fiction magazines of early-20th-century America were escapist reading for millions of Americans who wanted to romanticize war, revel in the Jazz Age and forget the Depression. The art echoed the era.

IN THE LIVING-ROOM coffee table of many a 1930s bungalow lay the popular magazines of the day. Besides coverage of the latest fashion trends, news of the world and gossip of film and radio stars, many also offered fiction. Saturday Collier’s—all included short stories, novellas and even serialized novels among their One category of magazines, though, fiction, crammed from oversized, often garish front cover to back with breathless prose, cranked out on a quarterly, monthly or weekly basis by prolific authors who were paid the merest pittance per word.

Their efforts were enhanced by the work of an entire generation of mostly anonymous graphic artists who contributed illustrations for both the covers and the interiors that captured—if in romanticized fashion—the distinct style ofthe America of the time.

Cheap and Popular
The magazines went by hundreds of different titles, but today they are generally referred to as “the pulps”—so called because they were printed on the roughest, cheapest paper the publisher could find. From the teens through the thirties they could be produced for about two cents each, wholesaled to news agents for about a nickel and sold to an eager public for as little as a dime.

The pulps’ golden era is generally considered to be the period between the world wars, although the earliest were published a number of years before World War 1 continued to appear into the late 1950s. Particularly during the Great Depression, when the average wage-earner’s take-home pay was $7 for a 10-to-12-hour work day, the pulps offered thrills, excitement, escape, romance and not a little sexual titillation for anywhere from five cents to a quarter for 128 pages of enticing reading. British journalist and pulp anthologist Peter Haining pointed out in his history The Classic Era of American Pulp Magazines that “there has not been a time, before or since, when so much entertaining fiction was available to so many so cheaply.”

The Rise of the Storyteller 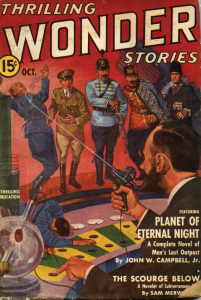 Frank Andrew Munsey, who moved to New York City from Maine in 1882 to embark on a prolific and lucrative newspaper and magazine publishing career, is generally credited with the “invention” of the pulp-fiction magazine. Convinced that the quality of the stories was more important to sales than the quality of the paper a magazine was printed on, he soon persuaded a struggling New
York publisher to produce the first pulp magazine, Golden Argosy. When the publisher went bankrupt, Munsey was able to acquire the business, his first. By the time of his death in 1925, he had been the owner of at least 17 major newspapers. Golden Argosy was a weekly “boys’ adventure” magazine of short stories and articles, printed on the cheapest wood-pulp paper available and wrapped in a slick cover stock to enhance its “value” perception. Its readership of boys proved inadequate to generate long-term profits from either circulationor advertising, and in the late 1880s Munsey reinvented it as Argosy, now aimed at a much broader, more affluent adult market. Still selling for only 10 cents, Argosy took dead aim at the highend “slicks” of the day that sold for 25 cents a copy.

Argosy was popular from the beginning, and over the next few years Munsey’s magazine empire, under the inspired leadership of his editor, Robert H. Davis, grew to more than 300 titles, ushering in a new era in popular entertainment. Davis had a genius for discovering talented writers such as Edgar Rice Burroughs and “Max Brand” (Frederick Schiller Faust) whose approach to storytelling was fresh and unique, and who would set the style for others to follow. Among those who found initial success in the pulps and would transcend the genre, going on to brilliant literary careers, were Zane Grey, Dashiell Hammet, Raymond Chandler, H.P. Lovecraft, Erle Stanley Gardner, Isaac Asimov and Ray Bradbury.

With the Depression past and a World War won, the pulps morphed into the lurid paperback books of the late forties and fifties, epitomized by Mickey Spillane’s 1947 classic I, the Jury. A few digest-sized fiction magazines— such as Ellery Queen Magazine and Analog—still appear on bookstore shelves. Authors such as Bill Pronzini and Max Allan Collins still ply their popular-fiction trade, though the “hard-boiled” attitude is often tempered for current tastes.

The Art of the Pulps 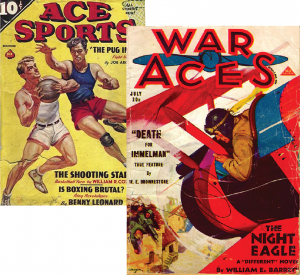 While a number of pulp titles were focused on mundane topics like romance, college life, sports and even inspirational fantasy, the vast majority specialized in “blood and thunder” action and adventure. The pulps were aimed primarily at male audiences (and young males at that), so violence, mystery, danger and sex peppered the stories.

The visuals underscored this. The stories were illustrated with sometimes crude blackand- white pen drawings. But the distinctive oversized covers displayed gaudy, feverish paintings that blared previews of the action inside. In the late twenties the paintings depicted ominous but static scenes; by the mid-thirties they had begun to capture moments of impending violence. zines visually, often with fleshcreeping, brain-haunting pictures of men in pain and women in terror of what was about to happen to them,” Robert Lesser wrote in Pulp Art—Original Cover Paintings for the Great American Pulp Magazines pulp cover on the crowded news-

stands of the Depression thirties, and those with the most fright, excitement and senses-pounding colors per square inch won.”
To boost circulation, publishers adopted the practice of touting their better-known authors’ names on the covers, as well. But the illustrators usually toiled without recognition. Even in their heyday, the artists were not household names. Today, unlike many of the era’s writers, they are mostly forgotten. Fortunately, the originals— both the stories and the art—live on for a new generation. Publishers like Carroll and Graf, Hard Case Crime and Vintage Crime/ Black Lizard reprint selected examples of the best the pulps had to offer. And if you search hard enough, samples of the excitement, action, romance and adventure can be found on the Internet sites of preservationists who just have to share the fun. To get an overview, try vintagelibrary.com/pulpfiction/pulpfictioncentral.php, pulpgen.com and gutenberg.org. Then imagine yourself sitting in your warm, cozy home, with a fire crackling in the fireplace, enjoying
the thrills and chills of Raymond Chandler’s “Killer in the Rain” or Norbert Davis’s “You’ll Die Laughing.”

Roger Rittner is an avid collector and student of pulp magazines, and an acknowledged historian of old-time radio. He is the radio archivist of The Society for the Preservation of Variety Arts and a producer of radio drama with a definite 1940s style. His latest project is Pulp Radio, a series of new radio plays based on classic pulp-fiction stories. Pulp Radio can be experienced at pulpradio.net.