by Jim Heuer
From Issue 50 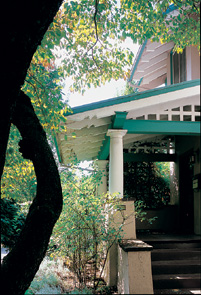 It started with a square grand piano. We were determined to find a house with a living room big enough for the 1871 Chickering grand that was languishing under a pile of books in a spare bedroom. “Just take a look at this house to get an idea of what’s on the market in your area,” our agent said on the drab day in March 1999 when we agreed to meet for a walk-through.

The stucco-clad exterior seemed starkly simple. A low-pitched, bungalow-style roof pressed down on the second-floor bay windows. The front porch with its sturdy pillars, spanning just half the width of the house, broke the symmetry of the facade. The broad panels of casement windows promised lots of light — essential during the nine months a year of Pacific Northwest gloom in Portland.

Once we walked in the door, though, we realized that the outward simplicity harbored an expansive interior. Passing through the small vestibule directly into the spacious living room, graced with an inglenook at one end (albeit without a fireplace) and a massive fireplace (without an inglenook) at the other, we realized that there was space here for several grand pianos. Indeed, the current owner’s concert grand sat at one end of the room. Pillars like none I’d ever seen framed the inglenook, and built-in bookcases extended all the way to the gracious triple-fold French doors leading into the dining room. 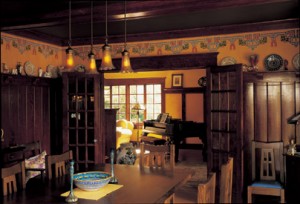 Despite dreary out-of-place Victorian draperies, woodwork slathered with dull and dismally dark varnish, and a disheartening neglect of basic maintenance, we were tempted to say, “We’ll take it!” right then.

What sealed the deal, though, was the master bedroom on the second floor, with dimensions rivaling the living room’s and its own substantial fireplace. Here, clearly, was a perfect house in which to live and entertain — and, ultimately, to restore.

Our efforts to discover the house’s origins and history and to restore much of its original interior character soon began. As it has turned out, they carried us further than we originally anticipated — to a new appreciation of its architect and a broader understanding of the architectural history of the Craftsman era in Portland.

Our first attempts at house research, though generously assisted by members of the local preservation group, the Bosco-Milligan Foundation, led us only into a thicket of dead ends: old building permits lost or destroyed, lax permit enforcement in the city’s early decades; and an apparent nonchalance about identifying architects. 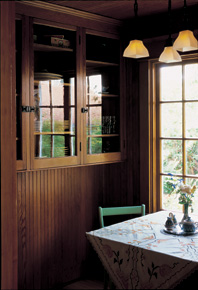 At first, all we knew about its history was what our agent had told us: it was built in 1906, about four years before Craftsman homes began appearing in Portland in large numbers. It wasn’t until we happened on a photograph on page 27 of Paul Duchscherer and Douglas Keister’s Inside the Bungalow — of “An Inglenook … by noted Portland architect Emil Schacht” that took up all of one end of a living room — that we had even a clue about who might have designed it. That inglenook was strikingly similar to ours, even to the unusual columns framing the opening. Either our house had been designed by Schacht, we thought, or a builder who was familiar with Schacht’s work had borrowed his style.

It took us more than a year to find the answer, which finally turned up among hundreds of Schacht’s drawings in the Therkelsen Collection at the University of Oregon’s Special Collections Library in Eugene. After a long day of searching, we came across the drawings for “House #14 for Russell and Blythe” depicting the plan of our house precisely, with just one difference: left and right were reversed.

Schacht, we learned, had been commissioned by Russell and Blythe, two local businessmen, to design a group of “modern” showcase houses for a newly platted tract, Willamette Heights, on a hill above the grounds of the planned 1905 Lewis and Clark Exposition, Portland’s widely promoted world’s fair. Like countless other developers, Russell and Blythe were betting that the exposition would bring a flood of new residents to the city’s rapidly urbanizing agricultural trading hub. House #14 was one of more than a dozen homes Schacht designed for the tract, tapping into the ideas of the English Arts and Crafts architects and those of Gustav Stickley and the American Craftsman movement. While the buildings were going up, Russell and Blythe used their local business and civic connections to engineer a regular streetcar tour from the gates of the fairgrounds to their new neighborhood. Thousands of the 2.2 million visitors who attended the fair must have taken the ride six blocks up the hill to see these new homes. 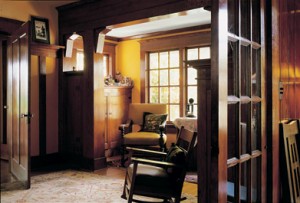 Young Harry Nicolai, whose father’s company was supplying millwork for the homes and who himself went on to become one of Portland’s most important entrepreneurs, admired Schacht and asked him to design a house for him on a lot in Irvington, across the Willamette River, which bisects the city. Ever thrifty, he chose an existing design — #14, the most modern of the Willamette Heights homes. Construction began right after Nicolai bought the land in September 1905 and was completed the following January.

For reasons now unknown, but perhaps to capitalize on the housing boom triggered by the fair, Nicolai put the house on the market in June. It took a long time to sell — it may have been too modern for the tastes of the day — and the several spec homes Nicolai built soon thereafter were more conservative.

By the fall of the year we bought the house, we had begun assessing how to take it back to its Craftsman roots. We decided that our big “dry run” for major restoration would be the breakfast nook — once the “Butlery” as named in the drawings. 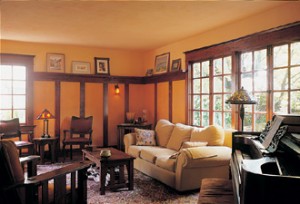 Over the years, a succession of owners had painted the beautiful fir tongue-and-groove paneling, glued cardboard over that, then applied seven layers of wallpaper in a desperate attempt to make a warm and inviting space, something we soon found the original paneling did remarkably well.

Spurred by an agreement to participate in the May 2001 Irvington Home Tour, in which 1,200 curious ticket holders would troop through the house looking at our restoration work, we pressed on through 2000 to complete the room. Digging paint out of hundreds of crevices, sanding out gouges and scratches harboring recalcitrant paint, and finally finishing the woodwork with four coats of hand-mixed orange shellac, we completed the work just days before the tour.

With that warm-up behind us, we turned to the multiyear preservation plan we developed later that year when we nominated the house for the National Register of Historic Places and applied for participation in Oregon’s Special Assessment of Historic Properties program. (The better candidate for the National Register listing would have been the original House #14 in Willamette Heights, but a 1950s remodel of that house had eliminated it from consideration.) The biggest part of the work was the restoration of the living and dining rooms in 2002. We remodeled the kitchen in 2003 and finished the planned interior restorations for the second floor last fall. As of early 2006, the restoration was about 75 percent complete. 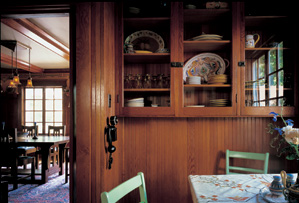 Given the near-total destruction of the Pacific Northwest’s old-growth forests, we were determined not to use newly cut old-growth Douglas fir to replace missing woodwork. A local millwork supplier filled the bill with old-growth wood cut from 100-year-old timbers from a demolished industrial water tank. As in 1905, each board was hand selected for the beauty of its grain.

In the living room, skilled plasterers recreated the seamless sand-finish (“rough under the float”) plaster on the ceiling and walls above the plate rail. Period-appropriate “milk paint” was an ideal alternative to the original calcimine paint — better, really, because its velvety texture and thinner film allow more of the sand texture to show through, just as the hand-mixed orange shellac has brought out the luminous grain of the Douglas fir woodwork, stained, as called for in the original drawings, to the “color of fumed oak.”

What’s left? The big question remains, “What about the stucco?” Our exploratory stucco removal has revealed shingles, nearly black with asphalt preservative, under the almost two-inch-thick metal-lath-reinforced cement stucco that extends nearly 40 feet from the ground to the peak of the roof. Removing it would be a major task and is not required under the preservation plan, but it would be a huge step toward the restoration of an important Craftsman house. 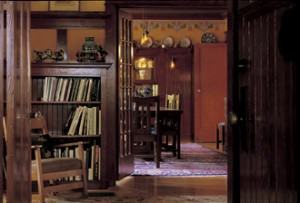 In previous lives, we had both been interested in architectural preservation, but that interest flagged as mid-life crises and making livings took precedence. This house project changed all of that.

Once we pinned down the architectural attribution to Schacht, we discovered that he was one of the most under-appreciated architects of his day. The standard histories of Portland architecture dismissed him as largely irrelevant; his last important commission was listed as the Oriental Building for the Lewis and Clark Exposition, even though his most important buildings came in later years: the Portland Police Bureau (1912), several major downtown office buildings, and his distinctive Craftsman Style houses.

Setting out to revive his reputation, we began by looking for buildings and houses that researchers in the 1980s had missed. We managed to expand the known list of his buildings in Portland from just over 180 to nearly 300.

To celebrate our discoveries, we held a party for owners of Schacht-designed homes.

Our research has now carried us beyond Schacht to other important Portland architects of the Craftsman era. We are continuing to discover Portland’s trove of Craftsman Style treasures and the talented designers who created them. All because we agreed to “take a look at that house.”

Jim Heuer is a logistics and transportation consultant in private practice. He and his partner, Robert Mercer, are preservation enthusiasts and volunteers at Portland’s Architectural Heritage Center. This is the second Irvington neighborhood home they have restored.