by Judy Seckler
From Issue 52 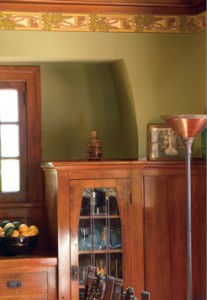 In 1999, Lisa Mann and John “Googe” Endieveri had been living about 15 minutes away from the gentrifying Garfield Heights neighborhood of northwest Pasadena and had been searching for a new home for about a year when, driving through the area one day, they spotted a “For Sale” sign in front of a large, stressed-looking bungalow with Swiss Chalet touches, which they quickly dubbed “the big red barn” because of the garish crimson and the white exterior paint that masked its most striking architectural details.

They immediately saw the potential of the 2,900-square-foot house. “It was just what we wanted,” Lisa says, “a large house with room for both an art studio and a music studio.” They learned that the home, whose exquisite original interior woodwork and built-ins were intact, had been designed in 1911 by Sylvanus Marston, one of the most prominent architects of Pasadena’s early boom years, the late 1880s to the 1920s. Marston was among a group of distinguished contemporaries — including Myron Hunt, Frederick Roehrig, and Charles and Henry Greene — who shaped what Kathleen Tuttle, author of Sylvanus Marston: Pasadena’s Quintessential Architect, calls the “unaffected elegance” of California Craftsman living. 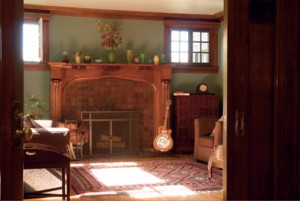 But the need for extensive rehabilitation was obvious. The house had been neglected for many years even before the 1987 Whittier Narrows earthquake damaged the roofs of both the house and the garage and — they learned later, to their horror — left the brick chimney in danger of collapsing. The rafter tails and other exterior wood details needed to be replaced. Twenty-three windows were cracked or broken. The plumbing and electrical systems had deteriorated.

On the other hand, with the intricately carved and molded interior woodwork relatively undamaged (despite the fact that the house had once been home to a family with nine children), and considering its heritage, the opportunity to acquire it through a probate sale was what Googe calls “kismet.”

“I never thought I’d find an old home like this in California,” he says. Moreover, the City of Pasadena had designated Garfield Heights as a landmark district earlier that year. That meant, among other things, that the serene bungalow neighborhood would be immune to any further intrusion by the apartment buildings that had replaced so many of its Craftsman-era homes during the previous quarter-century. It also meant that if they restored the house and documented the restoration, they would qualify for a 25-percent reduction in their property taxes under the provisions of California’s Mills Act.

Lisa, an adjunct faculty member in animation and digital arts at the USC School of Cinema-Television, and Googe, a guitarist and recording-studio information-technology administrator who once toured with legendary rock drummer Ginger Baker (of Cream fame), planned the restoration carefully, and in stages.

It was six months before they and their three-year-old son, Mason, could move in. During that time, they had the broken windows replaced, pulled up the ubiquitous green shag carpeting and refinished the oak floors, installed new utility systems and renovated the bathrooms.

The family then lived in the house for a year before tackling a second wave of structural and cosmetic projects. They had the roofs redone and rebuilt the chimney, whose precarious condition had gone undetected until the roofers discovered it. After the rafter tails and other exterior elements were repaired, historic green and brown paints were then used to complement the home’s clapboard and shingle exterior. The interiors were painted in muted green and cream pastels.

Lisa used her artistic eye to deploy artwork throughout the home, including a panel of portraits and a series of postcard-art watercolors done by her maternal grandmother. 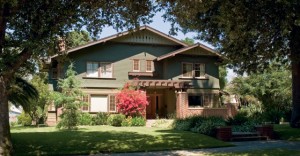 The most recent milestone in the home’s transformation occurred in 2004, when the producers of “Elizabethtown,” the 2005 Cameron Crowe comedy-drama, chose it as one of the film’s sets and, as part of the deal, agreed to give the kitchen a vintage makeover.

“I worked directly with the movie architect,” says Lisa, who worked in the film industry in the early 1990s and is an award-winning independent filmmaker in her own right. “I gave the crew Craftsman books and told them where to get historic fixtures and period hardware.” Her own contractor worked with the crew to get the necessary city permits. A breakfast nook that was built for the set replaced a former laundry area that was moved upstairs. The nook is now a room the family can enjoy for years. 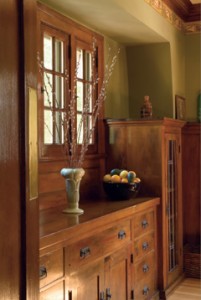 The Mann-Endieveri bungalow has quickly become a social hub for the surrounding community. Lisa became a board member of the Garfield Heights Neighborhood Association and hosted meetings and worked on the neighborhood newsletter. “It was wonderful to connect with neighbors,” she says. Her suggestion to start a neighborhood block party became a reality and has helped add to the already heightened sense of community that residents of the area began developing during the 1990s, when they were working to gain its historic designation.

Googe often performs with band members at home barbecues, poker and holiday parties, art receptions and, most recently, a reunion party for Lisa’s fellow alumni from the experimental animation department of the California Institute of the Arts. His gleaming electric guitar has a place of honor in the living room in front the massive wood-framed fireplace surround faced with original Batchelder tile.

Mason, now nine, and his sister, Maxine, who arrived in a home birth in 2003, have established their own social circles among the neighborhood’s younger set, for whom Lisa’s orange-and-black food is an annual attraction at Halloween parties. 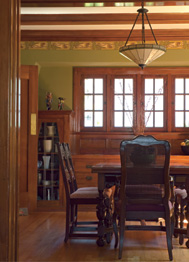 The couple’s efforts to recreate a historically accurate, cozy haven have been recognized with local, state and federal historical preservation honors. And Rene Rubalcava, a neighbor who is a Pasadena Historic Preservation Commissioner, says the couple’s dedication to preservation is complete.
“They’ve given it a hundred percent,” she says. “Lisa has been so diligent with her research and about maintaining the house’s integrity. She hasn’t compromised on a thing.”

That is certainly evident in Sylvanus Marston’s comfortable informality and understated elegance, lovingly recovered after nearly a century.

Judy Seckler is a freelance writer specializing in art, design and architecture. She has written for a number of publications including Agence France-Presse, AFP; Ceramics Monthly and Whole Life Times. Her article “Craftsman Distilled: An Artist’s Bungalow Makeover” appeared in AB No. 51, Fall 2006.