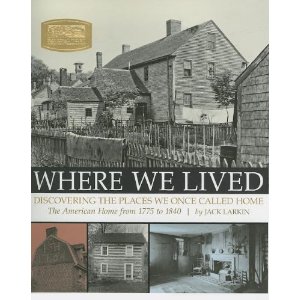 American Bungalow readers delight in the simplicity of life at the turn of the century. An appreciation for natural and unadorned design, precise handwork and a front porch sense of community draw us to the peace of less complicated times. But it’s clear from Jack Larkin’s close look at how the new nation’s families actually lived that our yearning for the good old days would have found its limits tested. Reviewing more than 400 remarkable black-and-white photographs and the engaging accounts of travelers, Larkin describes how families—in those days typically a dozen people—ate, slept, worked and played together in houses as small as our garages. In a rough-hewn land without heating, lighting or indoor plumbing, the simple life could be dark, dirty and crowded. The book’s starkly beautiful photographs are drawn from the Library of Congress Historic American Building Surveys (HABS), a program initiated in 1933 to documentAmerican buildings built between 1775 and 1840 (and to provide meaningful work for thousands of unemployed architects and draftsmen during the Great Depression).

From the farms and villages of New England to the townhouses of New York City, from grand plantations of the South to log houses and cabins of the West (when Missouri was considered the “West”), the images offer “a path to understanding the intertwined stories of early American families and their houses.” As Larkin notes, in the early 19th century people believed that a “proper house” would be organized in a certain familiar way. The houses of one tradition often looked wrong to those brought up in another. The diversity of people, traditions, beliefs and ways of life resulted in distinctly different houses, a truth noted by travelers on their journeys through the expanding housing landscape.

Larkin describes one particularly arresting vision, of a log house as related in 1818 by Frances Wright, the English social reformer. During the summer, families often removed the clay chinking between the logs to get better ventilation. A traveler coming upon one of these houses at night, with candles lit or a fire burning inside, would see the light spilling out of every crevice—the log hut glowing from within in the darkness of the forest. “Just like people,” Larkin writes, “houses are created, live, and grow old. Like us, they eventually disappear.” Many of the houses photographed by HABS have disappeared, underscoring the rule that what survives of the oldest are those that were built of brick and stucco. Since many wooden structures exist now only in these images, there’s comfort in the fact that more than 35,000 photographs were taken by the (still active) HABS and are available for viewing on the Library of Congress Web site, memory.loc. gov/ammem. Just as vividly, many beautifully worded anecdotes—of praise and scorn alike—are accompanied by descriptions from journals, letters and articles that bring these lost dwellings to life again.

Larkin concludes, “We know that houses are not just wood and brick, plaster and glass. They are the physical settings for our deepest memories and strongest attachments, and they resonate with powerful emotions. Never simply neutral containers, these old houses shaped the lives of our ancestors, who in turn shaped the nation we’ve become. Today, an increasing number of Americans want to find meaning, inspiration, and challenge in their history. The history of old houses and vanished landscapes is one part of that history. The past anchors us.”